Winter Fish Kill in Isle Lake: “The Problem is Land Use, the Solution is Land Use”

On March 16, the Edmonton Journal published an article focusing on the ongoing winter fish kill at Isle Lake, 80km west of Edmonton. The accompanying video shows hundreds of floating dead fish in ice breaks on the lake; thousands more can be seen gasping for air due to the low oxygen levels of the lake water. According to Government of Alberta fish specialist Dr. Michael Sullivan, “The problem is land use, the solution is land use.”

Albertans have been transforming the landscape for more than a century to produce food and other natural resources. Furthermore, urban centers, rural communities and their related infrastructure such as roads and power lines continue to expand. All this land use, he states, leads to increased nutrient run-off into lakes and rivers, which feed algal blooms that reduce oxygen levels to the point where fish can start to suffocate. The problem is worse in winter when ice covers these water bodies.

A subsequent Edmonton Journal editorial asks an important question: “Albertans have to ask themselves some questions. What do we care more about: Water quality or cottage view? Water quality or intensive agriculture including cattle ranching or crop harvesting? Most people probably agree that it should not be an either-or proposition: The fish kill indicates we are out of balance.”

This is an important question that will no doubt fuel debate for many decades to come. The ABMI’s job is to contribute credible, value-neutral scientific information to that discussion. With its border-to-border maps of landcover and human land use, the ABMI reports on how Alberta’s landscape has changed, and how it continues to change through time. Below, an ABMI-generated map of the 273 square kilometre watershed draining into Isle Lake shows how the majority of this region has been converted to agriculture and rural residential areas – 52% of the land base is covered by some form of human footprint. 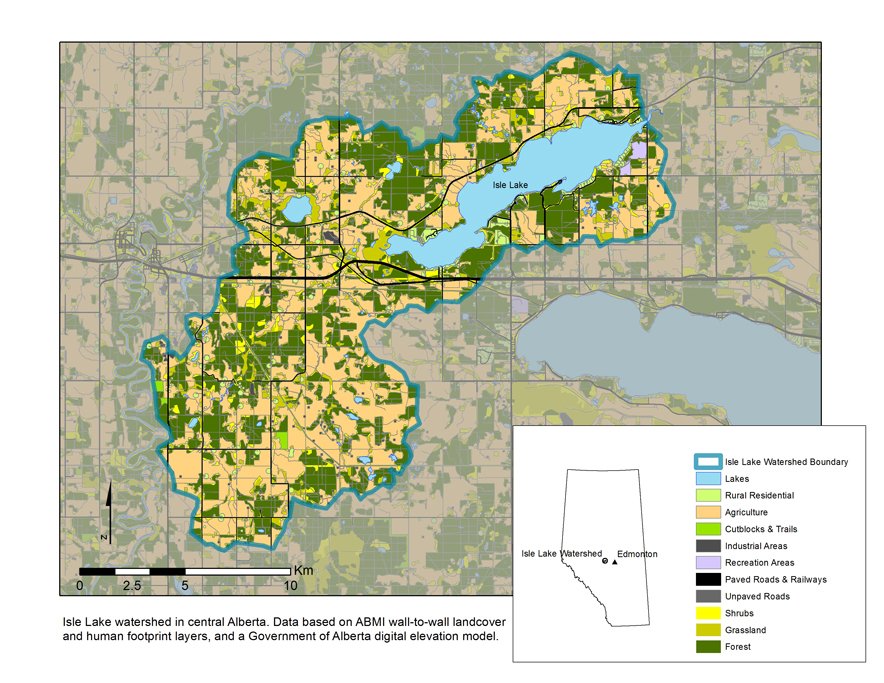 As Dr. Sullivan suggests, land use is both the problem and solution. The ABMI’s land cover and human footprint data certainly can help Albertans understand the problem, as well as drive the development of solutions. But we need to dig deeper on both sides of the equation. For example, achieving more water-friendly land use in the Isle Lake watershed would need buy-in from those that benefit (recreational anglers and swimmers, waterfront property owners, and so on) and those that might bear the cost (such as farmers, ranchers, property owners and taxpayers). As Dr. Sullivan and the Journal conclude, if Albertans want healthy lakes and rivers, maybe it’s time Albertans pitch in.

It’s probably not realistic to expect our entire land base to promote water friendly practices overnight. So where to start? ABMI’s Ecosystem Services Assessment Project is developing spatial models to understand what parts of watersheds contribute the most to poor water quality, as well as which areas are filtering out those extra nutrients before they reach places like Isle Lake. This knowledge and expertise would allow people to prioritize areas most in need of management so we can get the most water quality bang for our buck. It isn’t a question of water versus agriculture, but understanding how far we can go in one direction before we start to see negative consequences somewhere else – and using that information to build the Alberta we want.

Our ‘World Beneath Our Feet’ feature series leans in close, magnifies and investigates the many vast, thrilling and biologically-rich miniature ecosystems that exist underfoot. We are pleased to shine a light on these under-appreciated worlds and the people that dedicate their lives to studying them.
Latest Post:
Join us for a mite-y webinar! →