Did you know that earthworms are not native to Alberta? It’s ok if you didn’t—surveys done by the Alberta Worm Invasion Project show that only 15% of anglers are aware of this. The Alberta Worm Invasion Project—spearheaded by Dr. Erin Cameron and Dr. Erin Bayne*—is working to boost public awareness of earthworm invasions through basic research and social media. A little-known fact, the majority of Canada’s native earthworms died out during the last ice age. This means that the 14 or so species of worms currently in Alberta likely hitched a ride with European immigrants when they came to North America in boats.

Even less well known, earthworms are slowly changing the landscape of Alberta’s forests. As a result, they’re provoking new areas of scientific research and calls to action via citizen science. For the ABMI’s part, we are collaborating with scientists to look more closely at the relationship between earthworms and carbon storage, which ultimately has significant ramifications for climate change and how our ecosystems function.

Earthworms, a Conservation Issue?
While worms have a good reputation with gardeners as composters, it can be a very different story in our forests. Earthworms feed on leaf litter on the forest floor, speeding up soil decomposition. This, in turn, can affect the growth cycle of trees and other forest plants that comprise critical habitat for many forest species including birds, mammals and invertebrates. In fact, the impact of earthworms on forest vegetation was listed in 2011 as one of the top 15 emerging global conservation issues by the scholarly journal Trends in Ecology and Evolution.

Carbon Storage & ABMI
One major and largely unstudied aspect of earthworm activity is how they affect soil carbon storage in our forests. As organic matter, such as leaf litter, accumulates in forest soil it acts like a bank for carbon dioxide, effectively storing it underground it for a given period of time. A key question is, by driving greater rates of soil decomposition, does earthworm activity reduce the magnitude of carbon storage, and thereby contribute to increasing levels of atmospheric carbon dioxide that has implications for climate change?

Dendrobaena octaedra is the most common earthworm species in northern Alberta and lives in the layers of leaf litter. Photo: Dr. Erin Cameron

To address this question, the ABMI’s Ecosystem Services Assessment (ESA) project supported Dr. Cameron’s work to incorporate earthworm dynamics into an existing forest carbon budget model within a study area in boreal Alberta. After simulating forest growth and earthworm invasions and spread over 125 years, Dr. Cameron found a 37% decrease in carbon storage in areas with worms present compared to areas where they’re absent.

The next step in this work is to combine Dr. Cameron’s findings with ESA project models that represent the supply of various ecosystem services—benefits that humans receive from nature—across Alberta’s landscape, including carbon storage. To date, the ESA carbon storage model doesn’t include information on where earthworms are present, and therefore doesn’t account for earthworm activity. Based on Dr. Cameron’s work, this model will be enhanced to identify areas of the boreal forest where earthworms likely are, and how carbon storage is being altered as a result. Factors that contribute to earthworm spread (invasion!) such as the absence or presence of nearby roads will be incorporated into the model to predict earthworm presence. 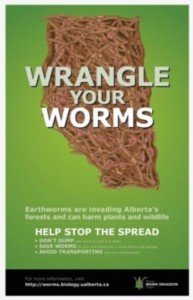 A poster for the Alberta Worm Invasion Project

In fact, humans are having a considerable impact on how fast worms are spreading. As a result, part of the mandate of the Alberta Worm Invasion Project is to teach people how to reduce earthworm introductions. Earthworms appear more often at roadsides due to transportation of eggs on tires and at boat launches due to anglers dumping bait – allowing earthworms to spread much more quickly than the approximately 10 metres per year earthworm populations can expand on their own. The project promotes the messages of “Don’t dump” and “Clean Tires” (and more) as simple ways to reduce earthworm spread.

To actually track the advances of the earthworm in Alberta, Dr. Cameron and researchers from the Faculty of Education at the University of Alberta are encouraging the public to become citizen scientists. Through their app “Worm Tracker” anyone can learn to identify and track earthworms. According to their site, “The data you collect will help researchers to know where worms are located, what kinds of worms are in your area and how quickly they are spreading.” If you would like to help with this project, you can download the Worm Tracker app from iTunes (http://worms.educ.ualberta.ca/) and get tracking!