The World Beneath Our Feet: The Mysterious Nature of Lichens (Part 1/2)

“Without lichens, the world would be bereft of beauty – lichens are the bling, the colour, the contrast in many of our ecosystems, including our urban environments. Beautiful oranges, red sexual structures, geometric patterns on rocks and concrete. And because we’re only just beginning to understand the diversity they harbour, we also don’t know the cascade of hidden biodiversity we might lose without them.” So, describes Diane Haughland – resident lichenologist at the Royal Alberta Museum (RAM) and the Alberta Biodiversity Monitoring Institute (ABMI) – the ubiquitous, often-misunderstood and overlooked organisms called lichens. 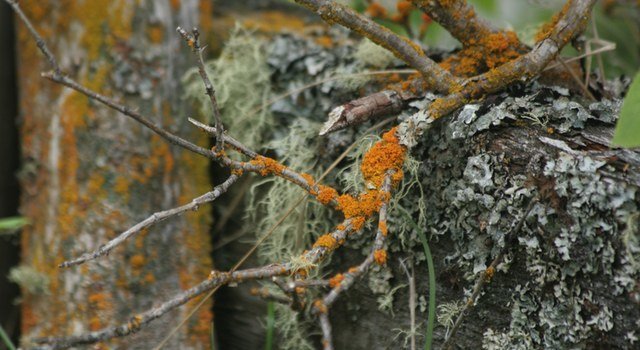 The ubiquitous lichen can be found in every corner of our forests. (c) Diane L.Haugland

“Of course lichens provide more functional benefits. They promote soil production and they help prevent erosion of other surfaces. They are food for a host of herbivores, such as caribou and flying squirrels and microfauna such as snails,” Haughland explains. However, along with the obvious benefits and the visually striking nature of lichens, Haughland is also keen to share the many hidden and perhaps surprising aspects of these truly unique organisms.

Lichens themselves are not plants and they’re not  mosses. Technically, a lichen is defined as a fungus and an algae or bacterium living together symbiotically, but the technical definition doesn’t do the reality justice. “Imagine a tapestry of fungal threads, interacting with different types of algae or bacteria. These tapestries are diverse and have evolved multiple times,” explains Haughland. “You can study the individual components but to do so would miss out on the bigger picture – that is, the unique partnership of algae and fungi that allow lichens to live in places that either partner by themselves could not. Each partner gains an advantage from the relationship – much like a healthy marriage. The algae photosynthesize to provide sugars to the fungus, while the fungus surrounds and protects the algae and captures moisture and minerals.” 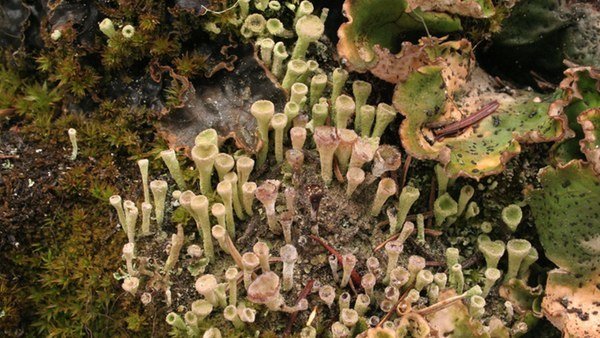 Another way to think about lichens is as mini ecosystems – like a forest scaled down. “They have the structural diversity of a larger forest just at a smaller scale,” says Haughland. “There are all kinds of organisms making their living in and amongst the lichens, including bryophytes, invertebrates and other fungi.”

To the humans that study them, lichens are contradictory; astoundingly resilient yet fragile at the same time. Lichens are present in virtually every terrestrial environment, including those where few plants and animals survive. Some Cladonia lichens can survive an incredible 101°C, just above boiling and in the Antarctic, some lichens can photosynthesize at -18°C; they can survive many months at -70°C and in the lab they’ve even survived dry-freezing at close to absolute zero (-273 °C).(1) Yet, lichens are far from invincible. Their ability to roll with the punches also makes them vulnerable to pollution – they absorb it passively along with the dew or rainfall that enables them to survive. Some lichen species are highly susceptible to sulphur dioxide, acid rain and heavy metal deposition, causing the lichen community to change in urban and industrial environments. 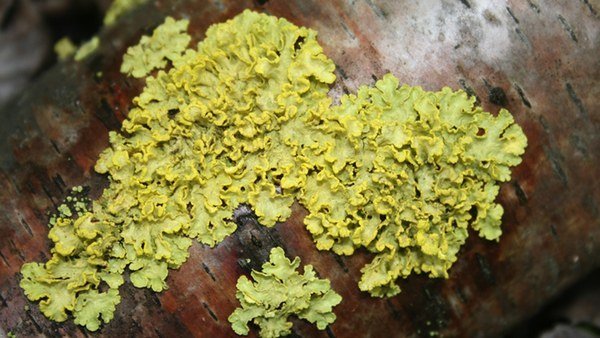 Lichens nurture life by supporting soil health and by providing an important source of food and nitrogen.”While there is a lot of nitrogen available in our environment, there are relatively few organisms that can fix that nitrogen into a form that we can use to make important macromolecules such proteins and DNA,” Haughland explains. Yet, lichens can also prove toxic to other organisms. Lichens produce chemicals called secondary metabolites that range from toxic to bitter to their predators. They can also produce chemicals which may inhibit the growth of plants or bryophytes in their immediate vicinity. “It’s competition in slow motion,” says Haughland.  These seeming contradictions add to the wonder of lichens. The fact that there are many aspects of lichens yet to be explored makes lichenology a fascinating field to be in today. 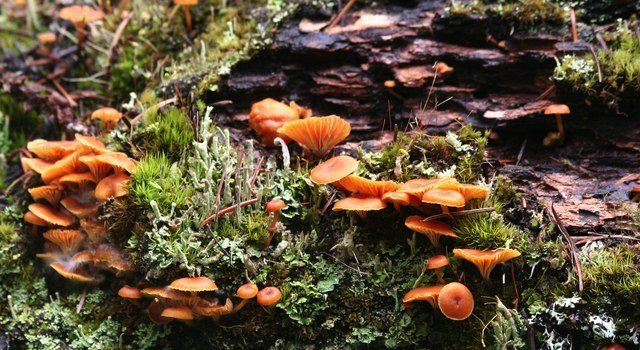 A mini-ecosystem: lichens, moss and fungi all congregate on this rotting log. (c) Diane L. Haughland

The partnership between the ABMI and the RAM is enabling the study of lichens in Alberta through extensive monitoring. The ABMI sends field technicians all over Alberta to collect lichen samples, which Haughland and her coworkers (Mireille Martel and Darcie Thauvette) and collaborators (Trevor Goward) identify and study. “This work is revising our understanding of where lichens live, which species are actually rare and require conservation while also documenting new species previously unrecorded in Alberta,” says Haughland. “We’re building on knowledge gained by Janet Marsh, Charlie Bird, and other lichenologists who have spent time in Alberta. This knowledge will provide a more accurate understanding of the vulnerability of lichens to broad scale environmental change such as climate change or oil sands development.” 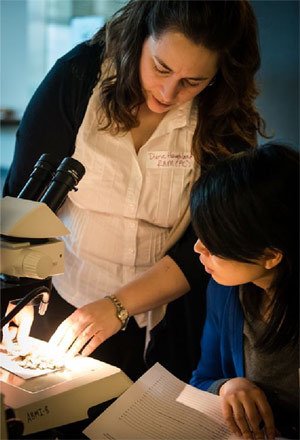 Besides increasing our knowledge of lichen biodiversity and ecology, the lichen team is also learning new techniques. The methods used to identify lichens are as diverse as the lichens themselves. They use a great deal of chemistry because lichens behave like chameleons and look different in different environments.“The real fun is that almost every time we expect a simple answer, we go further into complexity – we’re seeing chemically-distinct organisms that apparently haven’t been documented anywhere else,” says Haughland. She notes that lichenology is evolving and is increasingly using genetic data, and more precise chemical methods. Nevertheless there are many questions left to answer. For example, why do some species only seem to grow as rare elements within larger clumps of more common species? And how do lichens establish themselves after a disturbance? Future plans at the ABMI and RAM include tackling these questions and developing keys, species descriptions and images for macrolichens known in the province. Haughland has high hopes for the lichenological legacy ABMI and the RAM can offer Albertans. “Ultimately,” Haughland says, “we’d like to create resources that are useful to the public as well as specialists and that involves paying careful attention to language.”

In Part 2 of this series we look at the status of lichens in Alberta and Canada.

We may not realize it, but there is a vast microcosm beneath all of our feet. These creatures are part of nature’s variety on Earth (our shared biodiversity) and are critical to preserving the web of life.
The Alberta Biodiversity Monitoring Institute, along with its partners the Royal Alberta Museum and Alberta Innovates Technology Futures, dedicate significant resources to monitoring, identifying and processing this microcosm of organisms beneath our feet – the lichens, bryophytes, mites and aquatic invertebrates found across Alberta. The data we collect on these creatures tell us about the health of our environment and give us insight into the current condition of Alberta’s biodiversity.
Our ‘World Beneath Our Feet’ series leans in close, magnifies and investigates the many vast, thrilling and biologically-rich miniature ecosystems that exist underfoot. We are pleased to shine a light on these under-appreciated worlds and the people that dedicate their lives to studying them.
Back to List