Grasses and Mites and Mammals, Ya-hoo! The ABMI Talks Biodiversity Monitoring at the Calgary Stampede. 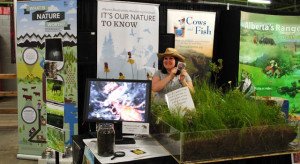 On June 21st, the grounds of the Calgary Stampede were literally underwater, submerged due to heavy and unrelenting rain in Southern Alberta. Amazingly, Stampede 101 opened “come hell or high water” on July 5th and was as fun and entertaining as ever.

Flood recovery – at breakneck speed – set the dramatic context for the ABMI’s inaugural participation in the Stampede’s Cattle Trail display. Power at the Agriculture Building (the location of the Cattle Trail) was restored less than two days before the Stampede’s scheduled start, and , as a result, participants only had one day (instead of the usual three) to drive onto the grounds and set-up. Avoiding crowds of people and livestock, we managed to maneuver our van carrying our freshly harvested chunk of native prairie (precious cargo!) through the chaotic grounds.  But once we arrived at the Cattle Trail itself, the real worry set in: nothing was ready for the next day’s opening-day crowds…

Miraculously, the scene looked very different the next morning (only hours before the gates were opened!) Thanks to the endless hard work of the many ever-smiling, tireless Stampede employees and volunteers, the show opened its doors to its dedicated fans and excited new visitors. The ABMI and partners  – the Canadian Cattlemen’s Assocation, the Alberta Conservation Association (ACA), MULTISAR, AESRD, and Cows and Fish, also came together at the eleventh hour to create colourful, interactive and engaging displays under the banner of the Environment Booth at the Cattle Trail…

Now, imagine yourself in the middle of a busy farm, packed with horses, pigs, cows and people.  Think of the sounds of hoofs clopping, the smell of, well, a cow-filled barn, and the sensation of humid summer heat trapped inside a massive crowded building – welcome to the Cattle Trail!

The Environment Booth was, in fact, the first stop along the Trail, and challenged visitors to see native prairie as both a working landscape, as well as home to a wide range of biodiversity. The ABMI’s display “Native Prairie by the Numbers” introduced folks to the some of the wildlife we monitor, starting with the hidden and mysterious world of soil mites. Our video footage of mites in action (eating pollen grains, attacking each other, and more) was a definite hit, although, some Stampeders may joke that it was more like a nightmare!  ABMI volunteers described the essential role mites play in nutrient cycling in the soil and how their activities support the productivity of the grassland. Perfect segue… to our square metre chunk of native prairie.  Visitors were challenged to guess how many species of plants could be found on the chunk (21! – including wild strawberry, three-flowered aven, and prairie sage). Many were surprised to learn how diverse our native grasslands are, giving them a new appreciation for the fields they see out their car windows. 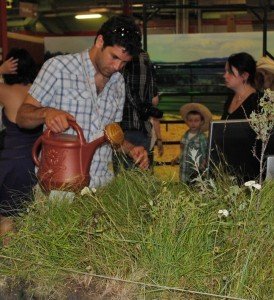 Further down the Environment Booth, people learned about the birds and mammals that also live on native prairie.  The ABMI’s bird recordings rang out while visitors were able to feel (samples provided by ACA) fur pelts (Wolverine, Red Fox and Lynx), handle real skulls and antlers, and examine the beautiful display of Canada’s largest hawk: the Ferruginous Hawk.  Cows and Fish also shared a fun quiz game to teach visitors about Alberta’s riparian zones.

Despite a frantic start, the ABMI was overwhelmed by our great experience in Calgary. To witness the outstanding results of so many people’s relentless efforts was truly inspiring. Knowing that where we stood throughout Stampede was under several feet of water only two weeks prior, it was hard not to stop and think about how unbelievable it was to even be at the event.  The large, curious and enthusiastic Stampede crowd truly made our job easy, and we look forward to returning next year with a fresh slate of fun ideas.