Weathering the Storm: Alberta’s Ferruginous Hawks in a Changing Climate

Not only does Alberta’s changing climate pose challenges for us humans, it does so for lots of other creatures as well. For a species like the Ferruginous Hawk, which already faces a variety of threats, climate change could have disastrous consequences for its survival in Alberta.

So, how will climate change affect Alberta’s species and what are some of the ways we can reduce the impact? The Biodiversity Management and Climate Change Adaptation (BMCCA) project at the ABMI exists to tackle these very questions and more.

The project’s new video “Weathering the Storm: Alberta’s Ferruginous Hawks in a Changing Climate” gives you a bird’s eye view (pun intended) of the problem faced by these iconic birds. You’ll also see how project scientists monitor the hawks’ behaviour to determine how climate may affect their populations and how they evaluate adaptation strategies designed to reduce hawk mortality.

Ferruginous Hawks (ferruginous refers to their reddish-brown colour) are North America’s largest hawk species. These raptors, which nest across the grassland region, are currently listed as “endangered” in Alberta and “threatened” throughout Canada largely, it is thought, because of habitat loss and land-use changes throughout the prairies. In 1987, the number of nesting pairs in the province was listed at 1,791. In 2010, that number had dropped by nearly two thirds to just 643 pairs.

Now add climate change to the mix. Climate projections for the Great Plains suggest our future will be hotter and drier with, as we’re already experiencing, more intense and frequent rain and wind events.  Heavy rains and high winds may make it increasingly difficult for the Ferruginous Hawk to nest, mate and fledge, (raise their young to flight), successfully. 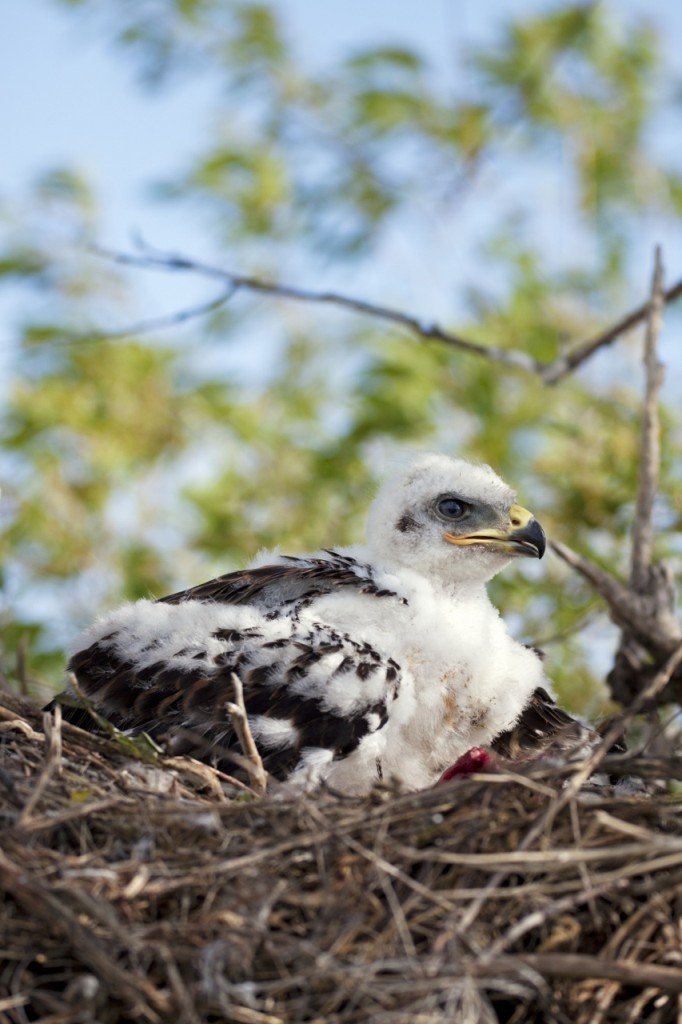 Alberta’s Ferruginous Hawks qualify as ‘Endangered’ primarily because of their small and declining population. Photo by Brenda Carson.

“Ferruginous Hawks – in fact, most birds that breed in the prairie – are at the mercy of the elements simply because there aren’t a lot of places they can take cover during harsh weather events,” says Dr. Ryan Fisher, former Post-Doctoral Fellow with the Raptor Ecology and Conservation team (REACt)  and project co-lead.

Prolonged periods of heavy rain limit the opportunities for the adult birds to hunt food for their young. When adults do hunt in the rain, the chicks are left vulnerable to cold and wet conditions.  In the case of strong windstorms, damage to hawk nests and the nesting trees can occur.   These weather events, at times, even blow the nests to the ground.

To measure the impact of more frequent extreme weather under climate change on hawk reproduction and survival, Fisher and other members of REACt monitor up to 300 Ferruginous Hawk nests each year.

“To monitor nests we basically check on them once a week. We use a painter’s pole with a camera secured on top to count chicks and eggs,” explains Janet Ng, University of Alberta PhD candidate. “We ultimately want to see how many young fledge out of that nest at the end of the season.”

The team also monitors adult hawks using satellite transmitters. According to Jesse Watson, MSc student at the University of Alberta, “We track the movements of male Ferruginous Hawks because they defend the territory. Knowing the hawk’s territory helps understand where the hawks will hunt and how far away from the nest they will travel.”

Finally, the team collects detailed information on local weather, using portable weather stations, to see how their data on hawk reproductive success, survival, and territory size correlates with the frequency and intensity of storms.

The conclusion to date? Ferruginous Hawks are very vulnerable to heavy rain and high winds.

The good news, however, is that artificial nest platforms used to encourage Ferruginous Hawks to build nests seem to buffer the nests against high winds. “We’re trying to identify which types of artificial platforms might be best to prevent wind damage to nests,” says Fisher. “If we know which designs are best from a weather perspective, those are the ones we can recommend.”

Now you can see for yourself! Click here to experience “Weathering the Storm: Alberta’s Ferruginous Hawks in a Changing Climate.”

ABMI’s Biodiversity Management and Climate Change Adaptation (BMCCA) project involves collaborators from the University of Alberta and the Miistakis Institute. The project receives its core funding from the Climate Change and Emissions Management (CCEMC) Corporation.

Top photo:   Ferruginous Hawks are the largest of the hawks flying in North America. Photo by Steven McSweeny.