ABMI Logistics Coordinators: The Wind Beneath our Wings

April 24, 2014 / Comments Off on ABMI Logistics Coordinators: The Wind Beneath our Wings / Category: Biodiversity, Monitoring
Posted by: Janet Harvey

Field season. It is the means by which the Alberta Biodiversity Monitoring Institute (ABMI) keeps its metaphorical finger on the pulse of Alberta’s many diverse species and ecosystems. Each spring and summer, the ABMI launches an enormous effort to monitor Alberta’s biodiversity across the province, from boreal bog to prairie pasture. Field season involves some 50 field technicians driving, quadding, or dropping in by helicopter to hundreds of ABMI monitoring sites to collect soil, record birdsongs, obtain moss and lichen samples, and conduct a number of other measurements. It is a massive undertaking to maintain such rigorous oversight of our province’s natural environment, requiring precise planning and care. Furthermore, to undertake this work in northern remote locations where there are few roads demands the full-time dedication of an ABMI logistics coordinator like Beth McLarnon.

A zoology graduate, McLarnon is heading into her second year as a logistics coordinator and her third year with ABMI. She spent her first year as a field tech on one of the crews responsible for monitoring sites in remote locations so she knows what it’s like to work long, hard days in the middle of nowhere. “It can be pretty intense,” she remembers of that first summer in the field. “But for most biologists that is the best part of the summer. A lot of days it’s 12 to 14 hours of really hard work but you have the best stories afterwards. And you feel so good, and so accomplished, when you get out of the field and know that you put in a solid day of work.” 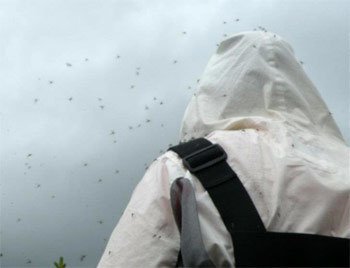 Nonetheless it is not all joy for those field techs. Long hours spent baking in the sun or drenched in rain, battling mud and insects with only your partner for company and only your tent for shelter can take a toll. Not to mention dangers with resident wildlife such as bears. However, every crew receives bear training and is equipped with bear spray in case of such encounters.

Wildfires can also be a risk. McLarnon recalls that during her summer as a remote field tech, fires prevented her and her partner from reaching one of their monitoring sites. A backup plan to send techs to sites in other locations is always in place.

In fact, it is this type of planning that now makes up a huge part of McLarnon’s role as logistics coordinator. She spends all winter preparing for the spring and summer field season—May, June and July (techs spend August in the lab sorting and identifying many of the samples they’ve collected). She prepares the field equipment—taking inventory, organizing it, and making sure everything is in good working order—orders supplies for the upcoming field season, packs crew bins, and readies the gear to send to the ABMI base camps. This spring and summer McLarnon and her crews will work out of Fort Chipewyan and Fort McMurray. Other crews will be based out of Zama City and Fort Vermilion.

One of five equipment areas at the ABMI Monitoring Centre's home base in Vegreville Alberta. Photo (c) Kendal Benesh

Naturally, things really gear up for McLarnon once field season is underway. Her role is to coordinate ‘remote’ crews; the techs of these crews are flown into their sites by helicopter and camp in the field. “I stay at base camp and coordinate with the helicopter pilots to send them food and new supplies like soil bags and aquatic bottles every day,” she explains. In return, the crews send her samples and data every night. She also helps the helicopter pilots coordinate their plans to move crews from site to site—the helicopter visits a site only once a day to deliver new supplies, pick up crew bags and move the crew, all at once. Shifts are 11 days long and crews cover nine sites in a shift, then get four or five days off. 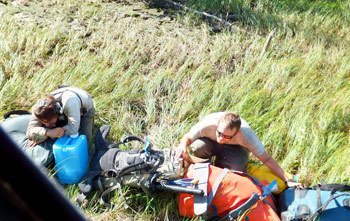 McLarnon’s most important responsibility is to ensure her crews are safe. She describes a typical day as beginning at around five in the morning when her crews start calling in at their designated check-in times. This is the most intense part of the day for McLarnon and she cannot rest easy or move on with the rest of her day until she has heard from everyone. Last summer one of her crews was 20 minutes late checking in. McLarnon went through a million disastrous scenarios in her head, fearing the worst, before they finally contacted her and admitted to oversleeping. ABMI protocol dictates that if a crew is one hour late for check-in, a helicopter is sent to search for them, a situation which has never occurred to one of McLarnon’s crews. Thankfully, every time this has happened it was only because the crew overslept or their satellite phone was dead. However, if the helicopter pilot cannot find the crew, ABMI would then call in emergency response.

Once she’s heard from everyone and knows they’re all safe (and has sometimes managed to go back to bed for an hour) McLarnon starts packing the crew bags for the day. She packs one 30-litre dry bag for each of her four two-person crews with new memory cards, newly charged batteries for radios, food, water, and some kind of treat—chocolate, cookies, chips with salsa or fresh guacamole, or frozen juiceboxes for really hot days. “It’s really important to me to send something special out to my crews every day,” says McLarnon. “I know firsthand what a morale boost it is to get a treat at the end of a long, hard day.”

The crews start calling in again when they are about halfway finished their sites and McLarnon then begins coordinating with the helicopter pilot to move each crew to their next site. At the end of the day the pilot returns from depositing the crews safely at their new locations and brings McLarnon the crew bags containing the day’s worth of garbage along with data and samples. She sorts through everything, reviews the data on her computer and stores samples in the fridge. Before bed her crews call in one last time and McLarnon has a quick chat with the helicopter pilot about plans for the next day.

Field work can be intense and some days are tough for techs and coordinators alike. The work is not for everyone. McLarnon says that some techs find the remote work too challenging and request a change to ground access sites if they return for another summer.  “The main part of being logistics for me is that you grow very close to your techs,” she says. “I can’t call them anything but MY techs. I feel almost motherly towards them because I am taking care of them all summer.”

With McLarnon, there is no doubt that those technicians will be in safe hands this summer. And through their work and the efforts of the entire staff of the ABMI, we can all have confidence that Alberta’s biodiversity is also in good hands.