Bogs and Bison: My Week in Zama City – A Field Technician’s Experience of the 2014 Summer Shifts

December 9, 2014 / Comments Off on Bogs and Bison: My Week in Zama City – A Field Technician’s Experience of the 2014 Summer Shifts / Category: Biodiversity, Data, Monitoring
Posted by: Lindsay Monk

There is a moment of panic that comes when you sink through a soft spot in a cattail marsh. Your first thought is, “how deep am I sinking this time?” followed by, “hopefully this water doesn’t go over my waders.” Your next thoughts are focused on getting out: “I’m only in up to my belly-button, this shouldn’t be hard.” Unfortunately, you have at least 20 kilograms of equipment weighing you down. To make things worse, there aren’t any trees or shrubs close by to pull yourself out of the mud, which just wants to suck you back down.

At this point, it’s time to call for help, and, after some wrenching and scrambling I am free at last, largely thanks to my field partner, Rianne. That’s the good news. The bad news is that this is just the start of our day, and I have eight hours left in leaky waders.

It’s July, and after getting through my spring shifts, I am now working out of Zama City, a remote industrial community of approximately 90 people, in the northwest corner of Alberta. Wildfires in the Northwest Territories have given the sky a smoky pink haze, and the days have been humid and sweltering. 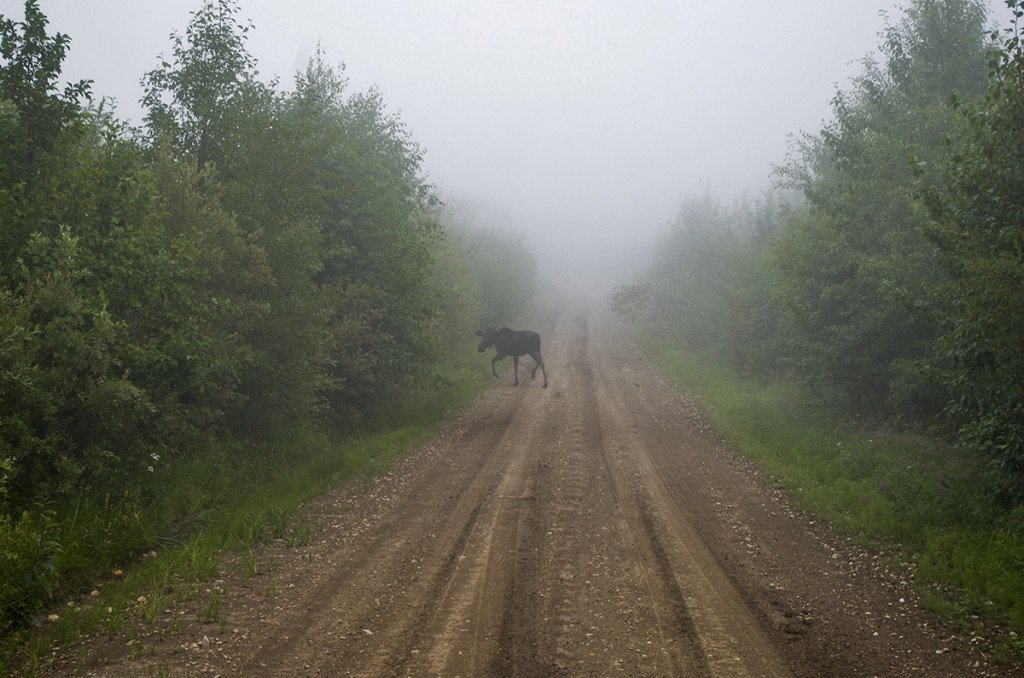 During the ABMI’s summer monitoring, technicians re-visit the same sites from the spring and implement a whole new set of monitoring protocols. Our roles also become more specialized. Rianne, a terrestrial plant technologist, will survey the entire site for vascular plants and create an inventory of all the plants found there. As the non-plant technician, my surveys include soil depth measurements, canopy cover, tree cores and measurements, and shrub and ground cover. After completing our respective protocols, we both spend a few hours collecting lichen and moss from throughout the site. In addition, the ABMI monitors wetland sites, and aquatic technicians have their own set of protocols as well! 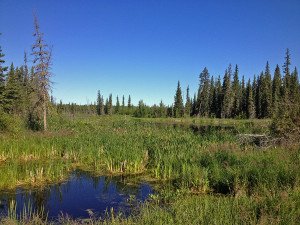 It is only a few days into our summer shift but there are a few differences from the spring – days in the field are longer, warmer, and the bugs have somehow managed to get worse. Several of the protocols are lengthy and timed, so it’s not unusual to spend seven or more hours on site, plus one or two hours to access the sites. In addition to sinking into the marsh when arriving to the site, there was an hour of trudging through masses of downed trees and thick shrubs just to get there. The previous day wasn’t any easier – wading through waist-high swamp water only to reach another marsh. But the reward for these challenges is the satisfaction of accomplishing our tasks, and being able to visit areas where few people have tread. 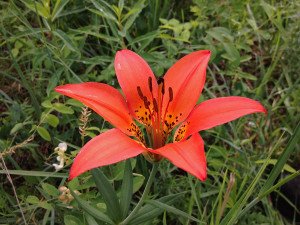 When we arrive at the centre of the site, Rianne begins her plant surveys while I start with soil depth measurements. Rolling out my measuring tape to 30 metres, I set up my transect line and go to work. As we’re at a lowland site with lots of organic soil, I use a probe (several thin, metre-long poles which screw onto each other) to gauge the depth of the organic layer. In upland sites, like forests and fields, I use a planting shovel and ruler for measurements as the harder soil makes it too difficult to penetrate with the soil probe and the shallow organic layer is more accurately measured with a ruler. These measurements provide useful long-term soil quality data at the ABMI’s 1,656 sites across Alberta. After measuring the depth of the organic layer every four metres for each transect, I roll up my tape and move on.

Luckily for me, today’s site is easy – the lack of trees and shrubs means there is no canopy, which would normally be measured at eight different points on the site using a mirror-like device called a densiometer. For tree surveys, I would find the largest diameter tree in each quadrant, and the largest tree on the entire site, and retrieve a core from the trunk using an increment borer. The core samples, which are about the diameter of a pencil, will allow the lab staff to age the tree (and the forest) along with determining other growth factors. This protocol can be time consuming – first to find the largest trees, and then extracting a core that is free of rot. The cores get placed in empty straws and labeled for processing at the end of the shift.

The last of my surveys before I rendezvous with Rianne is shrub and ground cover. In a 25m2 plot in each quadrant, I estimate the percentage of ground covered by shrubs, herbaceous plants, grass, moss, wood, litter, and several other environmental features. The data gathered from the protocol will give an indication of the make-up of the site’s understory layer; whether it is a forest full of shrubs and wildflowers, or a bog covered with mosses and lichens. 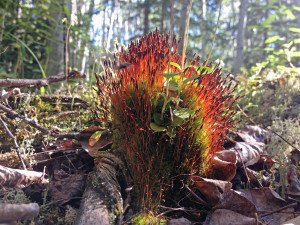 Upon finishing my surveys, I meet Rianne back at site centre for a quick lunch before the final part of the day – moss and lichen collection. Using timed surveys of both 10 and 25 minutes, we spend over a half hour crouched down on the ground, knife in hand, looking on trees, shrubs, logs, and other substrates for samples of moss and lichen. The collected specimens get placed in paper bags, and are later dried out in the trailers at the end of each day. When we finish our shift in a week, our samples will get sent to the University of Alberta and the Royal Alberta Museum for identification and sorting in August. Spending three hours each day hunting down samples makes me appreciate the diversity of vibrant green mosses which blanket forest floors, decaying logs, and crawl up the trunks of living trees. Likewise, lichens in brilliant colours and unique forms cling to branches, logs, and other surfaces. As moss and lichen are indicators of ecosystem health, the collected specimens can tell us lots about the site just based on their presence. Of all the ABMI terrestrial protocols, moss and lichen collection is the most dangerous. We were told during summer training that at least one person each year slices into a finger while trying to scrape specimens off a surface. Without naming names, this summer was no exception. 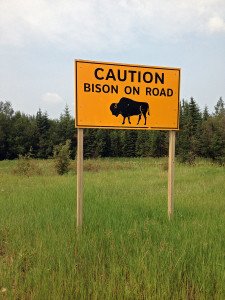 As we take down the flagging tape and markers which delineate the site, I wonder when someone will visit this area again. It’s an amazing feeling to be in such an isolated spot, where wood bison still roam through forests. The challenges faced day-to-day, like bad weather, relentless mosquitoes, and the early mornings are worth it for the chance to experience Alberta’s wilderness and wildlife. With each remaining day left in the field season I take time to appreciate how lucky I am to have a summer job that has allowed me to travel and work outdoors throughout the province, develop my professional skills, and create new friendships along the way.

As July winds down, the excitement and anticipation for next month rises. August means living in Edmonton, experiencing a new city, learning about moss, and meeting fellow ABMI technicians from the other bases. It’s going to be a blast. 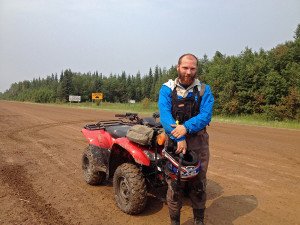 The author in Zama City, AB

The ABMI is now hiring field technicians for the 2015 field season – apply here!