We’re excited to introduce a new publication series: ABMI Science in Progress. Under this banner, we’ll release updates on work that’s currently taking place in the ABMI’s Science Centre—work that’s raw and will continue to evolve, but which we think our readers will find interesting in the meantime. This is the first installment, with the complete report linked at the bottom. We hope you enjoy this peek behind the scenes…at Science in Progress.

Eliminating even half of the false fires can mean a big reduction in time and effort.

There was a time when studying animals in the wild meant actually going into the wild. Not anymore: Just as computers and cell phones have transformed communication, new technologies are changing the way biologists, including those at the ABMI, monitor the natural world. Remote cameras are a great example. These units are small, relatively cheap, and can capture images for months even under extreme environmental conditions. But this convenience is not without its challenges. Most remote cameras detect animals by movement and infrared heat, but the system isn’t perfect. Sometimes a combination of, say, sunlight and a leaf moving in the afternoon breeze will fool the camera, leading to a ‘false fire’, or an image that doesn’t actually contain an animal. Sifting through the thousands of images captured during a camera’s deployment is labour-intensive, and the ABMI deploys hundreds of remote cameras each year for its monitoring work—enough to produce hundreds of thousands of images. As you can imagine, accurately separating out false fires is a major challenge for the ABMI. Fortunately, researchers in the ABMI’s Science Centre are working on a solution. 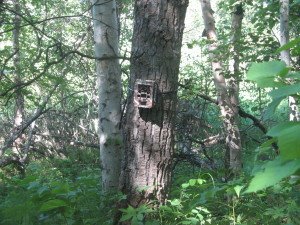 A remote camera deployed on a tree.
Photo credit: ABMI.

The approach uses sophisticated computer models called neural networks to analyze images and identify false fires. For this to work, the model must first be trained—the researchers have to show it examples of false fires along with counter-examples that actually contain animals, and let the model ‘learn’ the difference. So far, this approach has been successful in identifying nearly 45% of false fires. That may not sound like a great result, but given the number of images that must be reviewed, eliminating even half of the false fires can mean a big reduction in time and effort. Plus, the researchers used a conservative approach to training the model that minimized the number of images wrongly tagged as false fires. Over time, as modelling technology improves, the success rate should too. For now, though, this work gives a glimpse into the future of biodiversity monitoring, and highlights the benefits and challenges of using cutting-edge technologies.

Read the full PDF for a complete technical overview of this work!