The ABMI’s Caribou Monitoring Unit is on a roll! Fresh from the recent release of new research on the relationship between moose hunting, predatory wolves, and threatened woodland caribou, the CMU is at it again. This time, they’ve found a promising new way to prioritize the restoration of abandoned cutlines. Read on for the full story…

How do we decide when habitat of the threatened woodland caribou has been restored after human disturbance? A new study, led by Melanie Dickie of the ABMI’s Caribou Monitoring Unit (CMU) and published in the journal Ecosphere, suggests it’s when plants grow tall enough to block predatory wolves from taking the ‘highways’—seismic lines—they use to get around otherwise dense forest. The research should help prioritize areas for restoration, stretching precious dollars further in the race for caribou conservation. 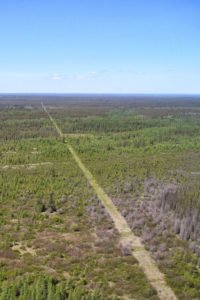 Western Canada is criss-crossed by thousands of kilometers of seismic lines—long, narrow cutlines that have been cleared of trees to allow geological surveys by the energy sector. Dickie has already shown that wolves use these seismic lines as ‘highways’, moving farther and faster than they would in the forest. When wolves can move more efficiently, they can likely hunt more efficiently, too—and that’s bad news for the woodland caribou. Not surprisingly, restoring old cutlines is a major priority in caribou conservation.

The question is, at what point is a cutline no longer a cutline, at least from the caribou’s perspective? Traditionally, land managers have followed the ‘visible from space’ definition: any disturbance is ‘restored’ when it’s no longer visible in high-resolution satellite imagery. The problem is that it takes decades for trees to grow, and wolves and caribou don’t base their decisions on data from satellites. Dickie and her team reasoned that as trees regrow, wolves wouldn’t be able to move around as rapidly and the risk to caribou would decline. But how tall is ‘tall enough’ for the risk to caribou to be reduced? In this new research, she and her team, including CMU manager Rob Serrouya and ABMI Science Centre Co-director Stan Boutin, used GPS collars to track wolf movement on cutlines that had recovered to varying degrees. Then, they related wolf movement to the height of re-growing vegetation.

The team found that wolves moved two to three times faster and farther on open cutlines. That changed when re-growing plants reached a height of 50 cm, or just under two feet. Once the plants reached this height, wolf speed dropped dramatically, almost to the levels found in undisturbed forest, and any further increases in vegetation height had only a small additional slowing effect on wolves. The team’s previous research had hinted at something like this, but, as Dickie notes, “This is the first time we’ve been able to actually test the mechanism and identify a vegetation height that translates to slower movement by wolves.”

A quick summary of Dickie’s research. Credit: Kate Broadley for the ABMI

The upshot is that from a caribou’s perspective, seismic lines might be considered effectively ‘restored’—that is, the additional risk associated with them might be considered negligible—once vegetation reaches 50 cm in height. That’s a big change from the ‘visible from space’ definition, which doesn’t consider the unique ecology of wolves and caribou.

One key benefit of this finding is that managers can now prioritize their restoration efforts more effectively. While the 50-cm height can’t be viewed as an ironclad threshold for caribou conservation, it does represent a useful criterion for deciding which seismic lines to restore first. For example, limited restoration dollars might be better allocated to seismic lines whose vegetation is under 50 cm, since those with higher vegetation likely already pose less of a risk to caribou.

Another benefit is that vegetation height is a simple index and can often be measured remotely via satellite or other aerial imagery. Again, this would allow managers to efficiently prioritize their restoration efforts over large regions, with less need for painstaking on-the-ground surveys.

Of course, complete habitat restoration for any species depends on many factors, of which vegetation structure is only one. But Dickie’s research shows that vegetation height might serve as a ‘shortcut’—a way to inform restoration efforts in the short term, buying time until complete habitat recovery can occur. Ongoing research like this can provide valuable tools to land-use managers as they develop strategies for caribou population recovery.