Between 1999 and 2015, human activity in Alberta visibly converted over 23,000 square kilometres of native ecosystems into residential, recreational, or industrial landscapes, an area 3.5 times the size of Banff National Park.

Feb 9 Update: This report received extensive coverage in the media. While some media outlets provided well-informed, balanced coverage, others resorted to sensationalist headlines that unfortunately misrepresented the report’s key findings. The ABMI has responded to this inaccurate coverage in a separate post.

To understand the extent to which Albertans are transforming the province’s natural landscapes, a map is worth a thousand words. Have a quick scan of the map “Distribution of human footprint in Alberta, c. 2014″—included in The Status of Human Footprint in Alberta (Preliminary Report 2017), the latest publication by the Alberta Biodiversity Monitoring Institute—and you’ll see that human activity is leaving a mark on large regions of the province. 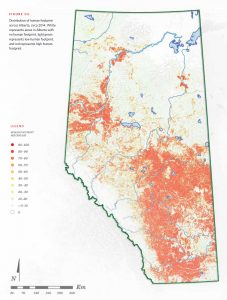 What is human footprint? The ABMI defines it as the visible conversion of native ecosystems to temporary or permanent residential, recreational, agricultural, or industrial landscapes. A lot of human footprint is obvious: parking lots, roads, buildings, and so on. But city parks, agricultural fields, and even forests in the process of regenerating after logging, also count as ‘visible transformations’ of the native ecosystem that used to be there.

Land transformation due to human activity is a major threat to biodiversity worldwide, so it’s important to be able to understand and manage this process. Evaluating how land-use decisions affect environmental sustainability and economic growth requires good underlying data. Which activities are transforming the landscape? Where and to what degree are these activities occurring? The new ABMI report provides the first-ever comprehensive Alberta-wide assessment of human footprint patterns, breaking them down by footprint type and by various sub-regions of the province. 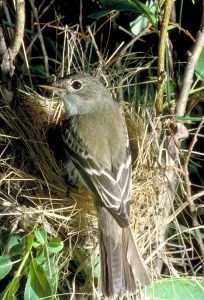 Populations of some species increase in response to human footprint, while others decrease. The Alder Flycatcher (Empidonax alnorum) is an example of a species that appears to benefit from human footprint. Photo credit: RAM

Information on the extent and type of footprint in a given area is vital to understanding the effect of associated industrial activities on species populations in that area. And, as described in the report, not all species respond in the same way to a particular footprint type. For example, the population of the Alder Flycatcher is actually predicted to increase in response to forestry footprint in the Boreal and Foothills Natural Regions of Alberta, as harvest areas represent new habitat preferred by this species. On the other hand, forestry removes prime upland habitat for the Black-throated Green Warbler, and, as a result, its relative regional population is predicted to decrease.

“Albertans have clearly stated they want land across the province to be used efficiently, to reduce the effects of human activity on Alberta’s species and landscapes,” said ABMI Interim Executive Director Stephen Lougheed. “This report provides comprehensive data on the extent of land transformation that’s occurring on Alberta, where this activity is concentrated, and what’s currently driving the majority of the change. It’s exactly this type of data that land managers in Alberta need to make informed land-use decisions going forward, and to evaluate the success of their decisions.”

The Status of Human Footprint in Alberta (Preliminary Report 2017) is also accompanied by an interactive online version. The ABMI is moving to an online reporting system to ensure Albertans receive data on the status of provincial biodiversity as soon as it’s available—future updates to the ABMI’s human footprint data will be added to the online report on a periodic basis. Explore the interactive online version, or download a copy of the print report through our publications archive.