Rarity and sample bias in the secret world of lichens

June 25, 2018 / Comments Off on Rarity and sample bias in the secret world of lichens / Category: Biodiversity, Monitoring, Publications, Royal Alberta Museum, Science, Taxonomy, The World Beneath Our Feet
Posted by: Kurt Illerbrun

A modified version of this post recently appeared as part of the ABMI’s regular feature in the Alberta Society of Professional Biologists’ newsletter, BIOS Quarterly.

Here at the ABMI, we like to say that you manage what you measure—that the more we know about our living resources, the more likely we’ll be to responsibly manage and conserve them. Mottos and catchphrases aside, the idea gets at something deep-seated in human nature. It’s sometimes called the familiarity heuristic (or bias); it means that we favour the familiar—people, places, species—over the unknown.

This bias toward the known can be a challenge in measuring and managing rare species. True, rarity can sometimes be overcome by other factors. Think of Woodland Caribou, which are uncommon yet well-known. But some species are both rare and—how to put this tactfully?—less popularly appealing than caribou. Such species may be ecologically significant or in any case scientifically interesting, but try to secure the resources to study them in depth and you’ll experience a version of the familiarity heuristic first hand. The result is some serious knowledge gaps.

Consider the rare (in Alberta) lichen Cladonia rei. Growing as a tangle of grey-green sticks (podetia, if you speak lichen) poking up an inch or two from the ground, it’s a species that you could be forgiven for not noticing. But there’s more here than meets the eye. Lichens like C. rei are excellent environmental indicators, offering valuable insights into ecosystem status and health. Despite this, many lichens are poorly documented. Often, our understanding of their status amounts to guesswork based on data from decades-old herbarium specimens, which can suffer from both geographic biases and taxonomic errors. The story of species like C. rei challenges the methods commonly used to document species distributions, and even what it means to be rare.

This is the focus of a recent paper by Diane Haughland and Ashley Hillman, both with the ABMI’s Processing Centre at the Royal Alberta Museum, and Ermias Azeria, with the ABMI’s Science Centre. “Cladonia rei was an interesting case because the existing herbarium records, after verification, suggested that the species was exceedingly rare,” says Haughland—in fact, they could confirm only one specimen from Alberta. Haughland’s team wanted to know what monitoring of the sort done by the ABMI—systematic surveys of many taxa, conducted by non-lichen-specialists—could reveal about C. rei when coupled with lab-based taxonomic techniques. 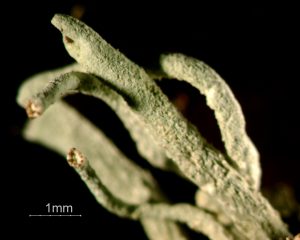 The ABMI monitors a grid of 1,656 sites across Alberta, sampling lichens along with a suite of other taxa based on detailed protocols that ensure standardized search effort. Based on those data, the team was able to draw on nearly 28,000 samples from the Cladonia genus alone. Next, they used thin-layer chromatography (TLC) to look for the unique chemical signature of C. rei, and then modelling to relate confirmed specimens to habitat variables. As Haughland notes, the combination of systematic sampling by non-experts with modern analyses in the lab “[allowed] us to survey habitats that traditionally weren’t targeted to document this species’ true ecology in Alberta.”

As it turned out, that ‘true ecology’ was very different from the picture painted by the historical collections. Haughland and her team found nearly 300 C. rei specimens, which showed that the species is relatively common in the dry mixed grassland, northern fescue grassland, and aspen parkland natural regions. The ‘rare’ lichen wasn’t so rare after all.

It’s not just C. rei. Thanks in part to Haughland and her team, we now know that many lichen species previously thought to be restricted to the mountains can be found across the foothills and even in the boreal. Species that were thought to be restricted to Eastern Canada can be found reliably in eastern Alberta. Still others that no one had seen or documented in decades have been ‘rediscovered’. On the other hand, some species really are rare. “That information is useful when we try to model how species respond and persist in the face of landscape alteration or climate change,” says Haughland.

Examples like C. rei show that systematic monitoring programs like the ABMI’s can help address knowledge gaps for species that have not been well-sampled (like lichens and invertebrates), precisely because they focus on standardizing sampling effort across all habitat types, not just on searching based on what we think we already know. “So far,” says Haughland, “We’ve added more than 35 species [of lichen] to the provincial flora and discovered new populations of a half-dozen more species that hadn’t been observed in decades. And we’re still only working with a subset of Alberta’s lichens.”

So then what does it really mean to be rare? Rarity reflects both intrinsic (how common the species really is) and extrinsic (how effective we are at sampling it) factors. Tracking rare or putatively rare species is challenging, with no single approach guaranteeing success. Every source of data, from herbaria to province-wide surveys and chemical analyses, has potential value, but the issues start when we give in to the familiarity heuristic and settle for what we already know. “The herbarium records are a critical resource,” says Haughland, “as long as we realize that taxonomy is not static and that we need to update our species concepts periodically to ensure we’re doing our best science.”

Ultimately, it looks like systematic monitoring by non-experts can help reduce sample biases for rare species. By exploring the issue, Haughland and her team hope to help Albertans better manage what they measure­­—part of why the ABMI made the C. rei paper open access. “The gains we make in documenting basic ecology and range help land-managers and industry because proponents can target their conservation and mitigation effort to the species that really need it, instead of species that are common but under-sampled”, she says.

Hopefully, the idea will prove contagious. While the ABMI is unique in the diversity of habitats and anthropogenic activities it samples, programs that share design elements exist around the world. Even in Alberta, the work is only beginning. Says Haughland, “I’m really excited about what we still have to learn from our lichens”.

Haughland, A. Hillman, and E. Azeria. 2018. Tackling rarity and sample bias with large-scale biodiversity monitoring: a case study examining the status, distribution and ecology of the lichen Cladonia rei in Alberta, Canada. The Lichenologist 50(2):211–230. Online citation and link to open access full-text here.