New collaborative research in the race to save Woodland Caribou

Woodland caribou populations in Alberta and BC are declining, and many will be lost without fast management action. To stem the decline in local population loss, intensively applying a cocktail of management actions is more effective than applying actions weakly or alone. These are some of the key conclusions of a new study just published in the journal Proceedings of the National Academy of Sciences of the USA.

Here are the details. As you probably know, Woodland Caribou populations in Alberta and BC are declining across much of their range. The most direct cause of the decline is an increase in Woodland Caribou predation by Wolves. Wolf populations are growing because of an increase in alternative prey species such as moose and deer and this, in turn, is ultimately caused by human-induced disturbance in forested ecosystems. Long-term solutions rest with addressing the ultimate cause: restoring habitat in altered landscapes. But caribou do not have enough time for this solution alone. This research underlines that a more immediate, short-term solution is needed: population management options that separate Woodland Caribou and predators (primarily Wolves).

Caribou have been the subject of various research projects and management initiatives throughout their range. In fact, one of the big challenges in conserving a species—like caribou—that is locally uncommon yet broadly distributed over the landscape is that its populations inevitably fall across multiple jurisdictions, land-use regimes, and socio-economic interests. To study such species, collaboration is vital, but also challenging to pull off. In this case, successful collaboration resulted in the largest-scale predator–prey manipulation experiment yet conducted.

In the study, Serrouya worked with a team of researchers from the Alberta and BC governments, the Universities of Alberta and Montana, and independent consultancies, plus received assistance from local First Nations. The team took advantage of management trials that were already taking place in 18 caribou populations across a more-than-90,000-square-kilometer region of Alberta and BC. These actions included predator reduction, prey (i.e., other large herbivores) reduction, translocation of caribou, and temporary protection of newborn caribou calves. How does each of these trials impact caribou population growth rates? 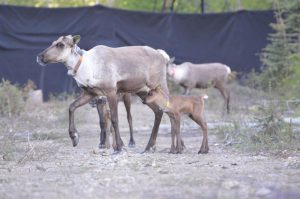 A Woodland Caribou cow and calves during a maternal penning trial. Credit: Revelstoke Caribou Rearing in the Wild (RCRW) Society

Overall, the study showed that population management actions have a positive effect on caribou populations, and that combinations of actions have a greater effect than single actions alone. Predator reduction benefited Woodland Caribou the most—perhaps to be expected given the immediate nature of predation itself—but prey reduction and maternal penning also showed positive results. Translocation was ineffective, but might work when combined with other actions. Regardless of which management action was chosen, caribou population growth didn’t improve if the action was only weakly applied.

The results suggest that some kind of population management action will be needed over the short-term to stabilize caribou populations until the ultimate cause of their decline—habitat alteration and loss—can proceed through reclamation and recovery. This is a clear, evidence-based conclusion, and it reflects the ABMI’s mandate of participating in applied research and providing rigorous information in support of current land-use and natural resource management challenges in Alberta and beyond.

At the same time, it’s encouraging that the plight of the woodland caribou has brought researchers and managers together in collaborative pursuit of a solution. This model, in which management actions are adaptive and informed by the best available science, holds real promise for future caribou studies.

The researchers stressed that active population management can be coupled with habitat restoration to improve the chances of keeping Woodland Caribou. More collaboration will be needed before caribou are out of the woods.