One of the basic principles underlying the ABMI is that one cannot know if species abundances are changing, if one does not know what they were to start with. For example, many readers of this blog may have heard of the worldwide decline of the Honey Bee (Apis mellifera), our agricultural pollinator mainstay. We have a handle on how colony collapse disorder affects honey bees, because we have a good understanding of how many hives we have. However, it isn’t only our domesticated bees that are disappearing, but many wild bee species as well. Although some of these wild bees are useful supplementary pollinators in agricultural systems, and critical pollinators in a few (e.g. blueberries, cranberries), it is our wild flowers that would be most affected by declines in native bees. 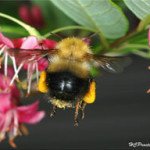 Among the 25,000 or so bee species known from around the world, one group of about 250 species (0.1% of the total) is of particular importance to those of us who live in the temperate, alpine, and boreal zones: the bumble bees (Apidae: Bombus). This importance derives primarily from three aspects of their life history. First, unlike most insects, bumble bees are able to maintain their body temperatures above that in their environment. This means that they can forage for pollen and nectar when it is too cold and miserable for other bees to fly. Compared to most other pollinators, bumble bees are doing their job earlier in the season, earlier and later in the day, on both cloudy and sunny days, and at higher elevations. Bumble bees have even been recorded flying in spring snowstorms and at subzero temperatures when nothing else is on the wing. 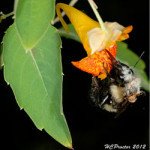 A third factor in the importance of bumble bees as pollinators is that they can learn to deal with complex flowers and unusual pollination syndromes. For example, purple flowers with long nectar spurs (larkspurs, monkshood, columbine) undoubtedly rely on bumble bees for pollination. So do many native legumes with pea-like flowers (vetch, peas, clover, locoweed, lupines) and deep, tubular flowers (penstemon, gentians, bergamot). Plants that require 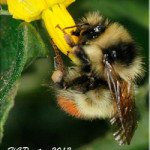 sonication or buzz-pollination have anthers that open only at the tips, much like a salt shaker, and must be shaken vigorously to release their pollen. Examples include shooting stars (Dodecatheon), many blueberries and huckleberries (Vaccinium), and many members of the tomato family (Solanaceae). The Honey Bee is not an effective pollinator of such plants, but bumble bees are. So much so, that bumble bees are now considered critical for commercial production of greenhouse tomatoes and peppers.

Perversely, it is this new found usefulness in agriculture that may be responsible for much of the recent decline in North America’s bumble bees. While Alberta can boast of at least two dozen species of Bombus, and areas such as the aspen parkland in the southwest have as many as 15 (Richards 1978), species formerly abundant 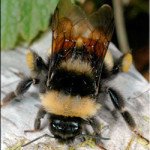 are disappearing. For example, Grixti et al. (2009) found records for only 16 species for Illinois and four of these appear to be locally extinct. Once common species such as the Rusty-patched Bumble Bee (Bombus affinis)

In much of Europe and North America, habitat destruction and management practices that reduce pollen and nectar sources seem to be the root causes of bumble bee decline. However, for the three species above a more insidious cause is suspected. All three species that have declined severely and rapidly belong to the subgenus Bombus (Bombus) and are close relatives of those bumble bees domesticated in Europe for greenhouse pollination. As a result, Bombus (Bombus) species such as the European terrestris and the North American occidentalis have been mass reared and shipped around the World. As part of these commercial operations, New World bees have been exposed to Old World pathogens and then shipped back to North America for use in greenhouses. Invariably, some greenhouse bees escape and intermingle with native bees foraging at flowers around greenhouse facilities. The result is the spread of Old World diseases for which our New World bees have little or no resistance (Colla et al. 2006, Rao & Stephen 2007, Otterstatter & Thomson. 2008).

As bumble bees and other native pollinators have declined, interest in them has risen. There are now numerous scientific research and citizen science projects aimed at determining the health of native pollinators and doing what can be done to foster their preservation. Although it is too late to put the pathogen genie back in its bottle, there is still time to protect and encourage our native pollinators. For those interested, much useful information can be found at Pollination Canada (http://www.pollinationcanada.ca/) and the Xerces Society (http://www.xerces.org/bumblebees/guidelines/ ). Collecting information on what species of bumble bees are out and about where we live is one way that all of us can contribute. 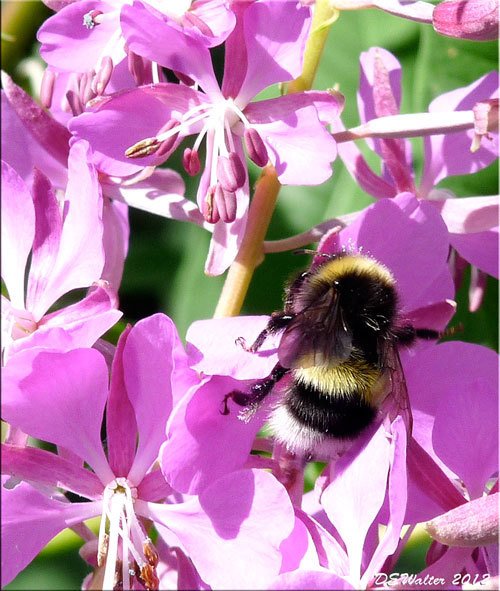 Berstch A. 2010. A phylogenetic framework for the bumblebee species of the subgenus Bombus sensu stricto based on mitochondrial DNA markers, with a short description of the neglected taxon B. minshanicola Bischoff, 1936 n. status. Beiträge zur Entomologie 60: 471-487.