What It Takes to Monitor Alberta’s Biodiversity

April 4, 2014 / Comments Off on What It Takes to Monitor Alberta’s Biodiversity / Category: Biodiversity, Monitoring
Posted by: admin

“I try to remind everybody to take a step back and look at the magnitude of what we’re doing. I think people on the ABMI staff take a lot of pride in that.” Colin Twitchell, Director, ABMI’s Monitoring Centre

Every spring, in the final weeks of April, ABMI’s Monitoring Centre in Vegreville could be mistaken for a bee-hive on steroids.

It’s well-oiled, smooth and organized chaos as staff scramble to get everything ready before dozens of field technicians travel across the province — from the Canadian Shield in the far northeast to the grasslands of the southern prairie, and from the B.C. to the Saskatchewan borders — to survey and collect data about Alberta’s plants and animals.

The goal of this huge field operation is to track the population of Alberta’s species over time and report back to Albertans on the state of their natural world or biodiversity. The rigorous depth and breadth of the data, collected in this way since 2007, is unique in the country. In fact, ABMI’s rich database is used by scientists and researchers around the world.

The 2014 field season will be another busy season, with 53 field technicians fanning out to 179 sites. From May to July, they’ll work 10- and 12-hour days in the field for 9 days at a stretch collecting land or terrestrial data — bird calls, soil samples, trees (type, height, diameter and density), vascular and non-vascular terrestrial plants such as moss and lichen — and wetland data, including water chemistry, physical characteristics, vascular plants and aquatic invertebrates. (In winter, data is collected by monitoring the tracks of medium to large-sized animals.)

Gearing up for the three-month field season is a non-stop cycle of preparation, says Colin Twitchell, director of the ABMI’s Monitoring Centre. 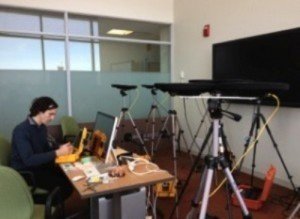 It begins in July of the previous year, before the current season is even over. ABMI must choose the sites, consult satellite photos to figure out access and prepare maps. An access manager meets landowners to ensure ABMI teams have permission to access sites. Field technicians are recruited, interviewed and hired.  This year, thanks to intensive recruiting efforts, the ABMI saw its largest pool of applicants to date. Over 1,500 people applied and 150 were interviewed for 53 jobs — then their abilities are matched with a partner and a site. Equipment is checked over, repaired, purchased and readied for the field.

Twitchell’s team arranges transportation, from ATVs to trucks to helicopters to amphibious vehicles–no small feat. They also make sure field technicians (the boots in the field) are outfitted with all the gear they need, as well as field equipment to collect and transport thousands of plant, soil and aquatic samples. And they ensure the field technicians have food to eat, places to sleep and, most importantly, that they stay safe.

Twitchell says safety is the No. 1 priority when preparing for the ABMI field season. “We have 60 young adults with a whole bunch of big equipment spread out across the province, so safety in the field is critical. We spend a lot of time working on it and putting plans in place to make sure that everybody out there can stay safe.”

Field technicians spend more than a week being trained in first aid, bear safety, hazardous materials safety and in driving large trucks and all-terrain vehicles. Those posted to remote locations take as many as 80 hours of safety training in all, including a wilderness first aid course. In the field, technicians work in teams of two. They check in twice daily by satellite phone and their helicopter pilot makes physical contact with them at least once a day. 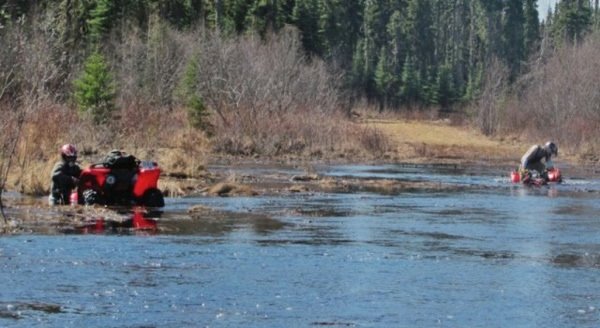 “The goal is to help field technicians be ready for anything”, says Twitchell.

That includes the occasional bear. Field technicians are trained in bear safety and are pulled off a site if a bear seems like it might cause trouble. Alarms can also be set up around a campsite in case a bear shows up in the night.

Jacqueline Dennett, a former field technician and co-ordinator, recalls her own experience with a bear. It showed up when she was recording bird calls but retreated when she yelled at it. Later, she and her field partner returned to camp to find the bear had made a snack of their equipment. Although the bear was gone, they decided to report it to their supervisor by satellite phone. Just as she was leaving a message, the bear came crashing into the camp. “So all the supervisor heard on his message was ‘Oh, my God, the bear is back!’ We were screaming at each other, then screaming at the bear,” says Dennett, adding they had a long quad ride before they could call the supervisor again.

“He told the other technicians the story later as an example of things not to do: leave a screaming ‘There’s a bear!’ voice-mail and then not call your supervisor back.” 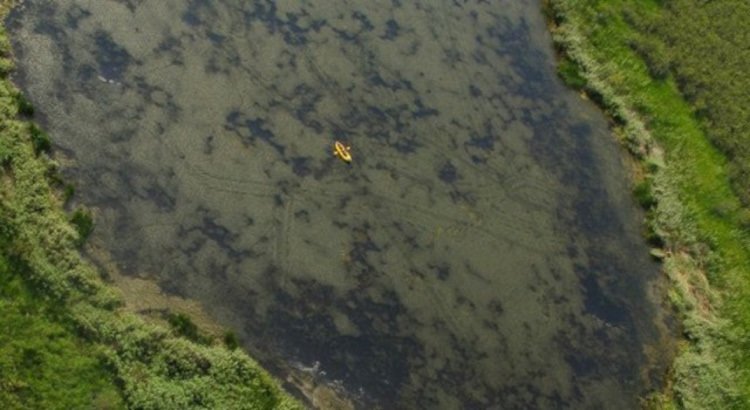 The job is gruelling and challenging, says Dennett, but it can also be exhilarating and a lot of fun.

A big draw for many field technicians is getting the chance to explore parts of the province that most people never see. Most are students in biological or environmental sciences and come from all over the province and Canada. They gain valuable experience learning collection protocols for a wide range of species in a variety of landscapes.

“I think you can get such a huge sense of accomplishment at the terrible sites and then you can also have such joyous days at the really nice sites. Having those mixed together is a big draw.” says Dennett.

“There are sites that are gorgeous, particularly way up in the northeast corner of the province. If it’s a beautiful day, you see some awesome wildlife and the site is incredibly beautiful, you can have a really magnificent nature moment.”

But it’s far from idyllic all of the time, as the field co-ordinators make sure recruits know before they head into the field.

“The exposure to weather can make things uncomfortable — really uncomfortable,” says Twitchell. “We’ve had it snow when we’re out collecting data; we’ve had it 90 degrees; pouring rain. It really is a challenge to do this day in and day out. If you’re on day eight and it’s been raining for the last six days when you’re out there collecting data, it really is a challenge.”

Then there are the infamous Alberta bugs. “The bugs are huge,” Twitchell says — and it’s not quite clear if he means it literally as well as figuratively. “The black flies in the north some days, they’re in your eyes and in your nose and in your ears. If you’re having a bad day, it can be enough to put you over the edge.”

In many cases, getting to the data collection site is a challenge in itself. In other cases, the terrain makes the work arduous: Alberta has huge swaths of swamp and bog land, not to mention dense brush, especially in the north.

Some field sites are so difficult, “they’re burned in your memory,” says Dennett.

“I’ve been to sites where it takes three hours just to get to the site, and when you get there the site is horrible — it’s wet, really dense, really shrubby. You can barely take a step,” says Dennett. That can make for 10- and 12-hour days for some field techs, depending where they’re posted.

For Twitchell and the field co-ordinators, field season is a lively and unpredictable time. They troubleshoot everything from field technicians forgetting to check in, to equipment that isn’t working, to vehicles buried up to their axles in mud, to flooding and forest fires.

He says the team learns something new every year and works continually to improve and expand the data collection process. ABMI’s goal, once its plan is fully operational, is to revisit each of the 1,656 sites every five years. “I try to remind everybody to take a step back and look at the magnitude of what we’re doing. I think people on the ABMI staff take a lot of pride in that.”