Two Sides to the Story: the Impacts of Climate Change on Alberta’s Burrowing Owls; an Endangered Species

What do you get when you combine plywood, a plastic bucket, and a tunnel in the prairies? An artificial burrow for one of Alberta’s most fascinating underground dwellers: the Burrowing Owl! It might be surprising, but artificial burrows may be one way to help Alberta’s declining Burrowing Owl population respond to the potential negative impacts of climate change. And, while climate change could adversely affect these endangered birds, it may also provide them with a big opportunity. 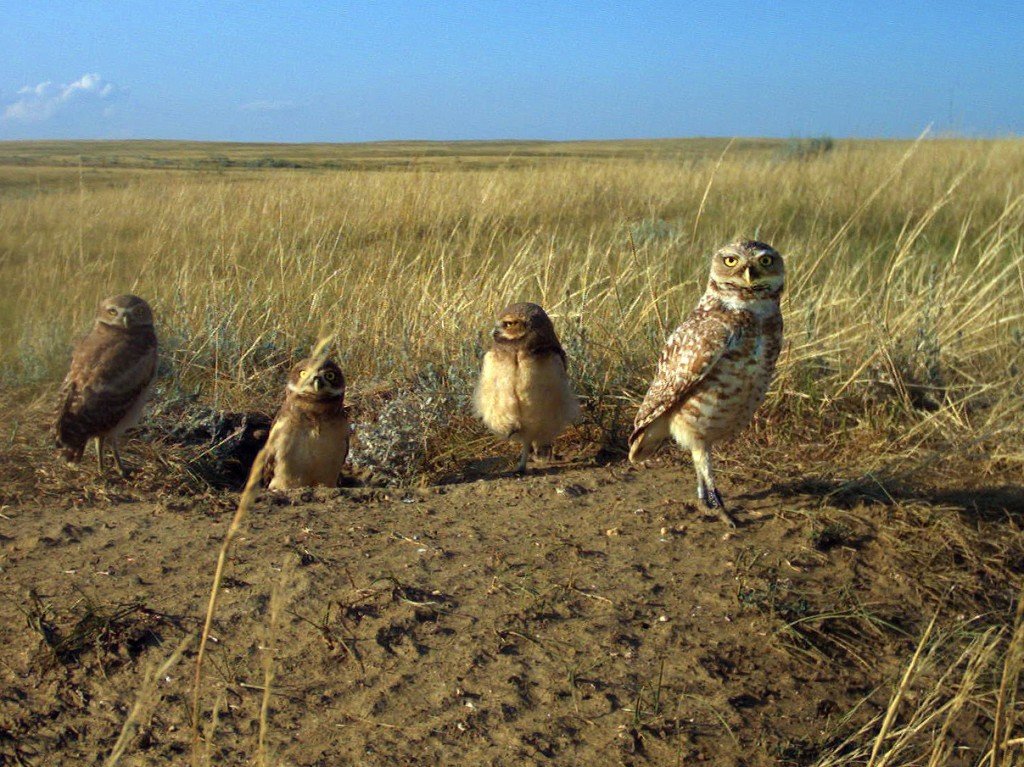 Status of Alberta’s Burrowing Owls The Burrowing Owl is facing serious threats: its range in Canada has contracted by approximately 36% in the last 30 years. As a result, this small prairie bird is listed as an Endangered species both federally and provincially. Dr. Erin Bayne, a University of Alberta Professor of Biological Sciences and a collaborator on the ABMI’s Biodiversity Management and Climate Change Adaptation project, has been involved in monitoring owl nests for 20 years, in partnership with Environment Canada. Dr. Bayne and his colleagues want to know why Burrowing Owl populations are declining and to find strategies to support the recovery of Burrowing Owls in Canada. The decline in Burrowing Owl populations and the contraction of their range has often been associated with changes to the prairie ecosystem, specifically the loss of grasslands to agriculture, but Dr. Bayne suggests that the reality may be more complicated: “The link between migration, the weather, climate, the availability of food – they’re all interplaying, so the problem is much more complicated than just agriculture.” In addition to the changes in land use over the last century, Alberta’s climate in the grassland region has also been changing and will continue to do so into the future. Climate change in Alberta is likely to affect Burrowing Owls in two ways, and it isn’t all bad news: The first potential effect of climate change to Alberta’s Burrowing Owls represents a threat: as climate change progresses, we expect an increase in the frequency and severity of extreme weather events, like heavy rain. Through their 20-year study of Burrowing Owls in prairie Canada, Bayne and his collaborators have found that Burrowing Owl nests frequently flood during heavy rainfall events. Owls rarely return to flooded nests and flooding can cause irreparable damage to natural burrows. Furthermore, in long periods of rainy weather adults sometimes fail to bring enough food to their chicks. If the adults don’t bring food, the owlets will starve. In an experiment where the research team provided supplemental food to a portion of Burrowing Owl nests and monitored them throughout the season, they discovered that owlets that received additional food were better able to survive through bad weather events; those that weren’t fed frequently starved. Because Burrowing Owl populations are very low, anything that negatively impacts their survival and reproduction is likely to have huge ramifications. Furthermore, their restricted range makes them even more vulnerable to extreme weather events: a single storm could affect a large percentage of Alberta’s owls. As these extreme weather events become more frequent in the future, the impacts on Burrowing Owl populations could be severe. 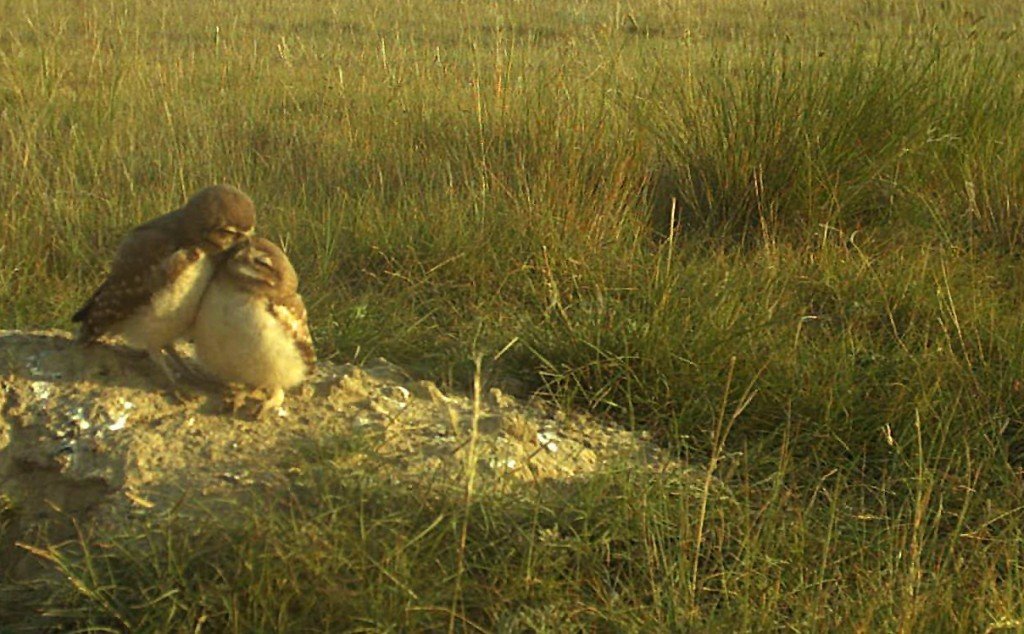 But, there is good news. The other way climate change may affect Burrowing Owls might actually present an enormous opportunity to help the owl population recover: by creating new areas of suitable habitat. An ABMI report on the effect of climate change on Alberta’s Natural Regions indicates that, as climate change continues to progress, there’s a strong likelihood that southern Alberta will become warmer and drier, which in turn, will drive grassland and parkland vegetation associated with hot and dry conditions northward. If these predicted changes happen, the suitable climate, and eventually suitable habitat, for Burrowing Owls should actually increase! Because we have such a small population of owls in Alberta right now, even if suitable climate and vegetation expand northward it’s unlikely that Burrowing Owls will expand their range naturally. This presents a unique opportunity for evaluating recovery strategies. How could both the risk and opportunities of climate change for Burrowing Owls be managed? In their recently completed Burrowing Owl Climate Change Adaptation Plan for Alberta, Dr. Bayne and collaborator Dr. Ryan Fisher, a post-doctoral fellow at the University of Alberta, consider management response options for the owl in the face of both the risk of increases in heavy rain and the opportunity for range expansion offered by climate change. Bayne and Fisher suggest that reintroducing Burrowing Owls into regions where they used to live may be a possible strategy for this species at risk: “Climate change, in a way, opens up new possibilities,” argues Dr. Bayne. “As habitat conditions potentially become more suitable to support Burrowing Owls, the option of reintroducing them into any part of their former range creates potential for the population to grow.” 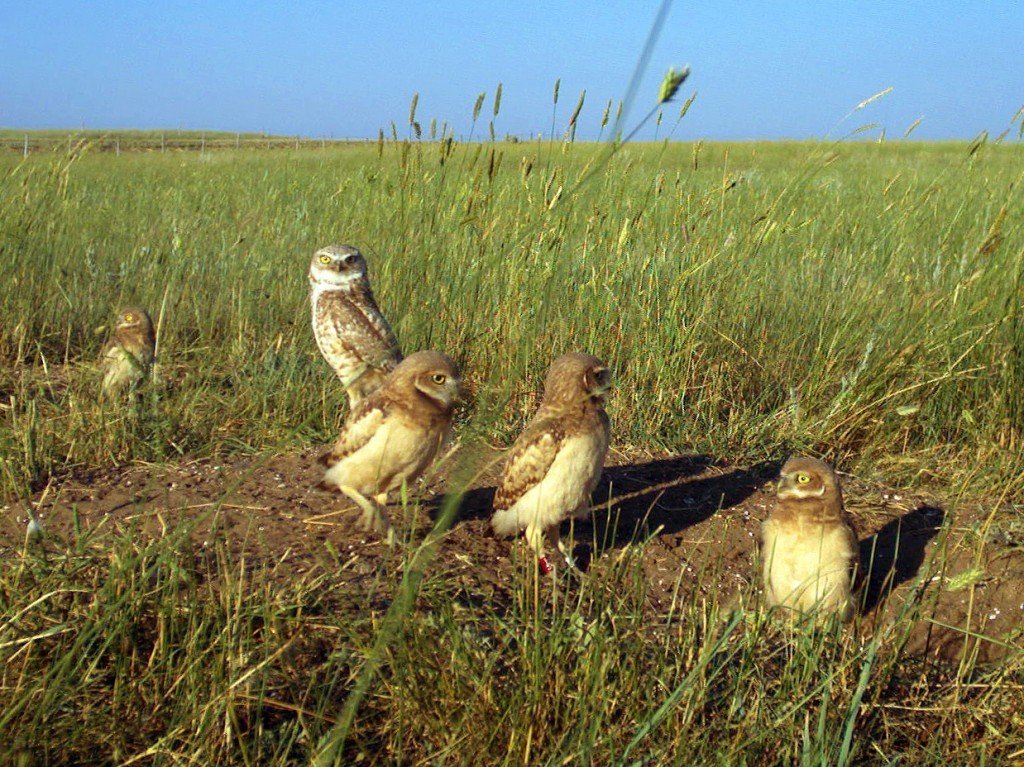 However, even if the range of Burrowing Owls is expanded through reintroductions, the risks of climate change still need to be managed. An increase in the frequency and intensity of extreme rainfall events continue to be bad news for long-term nest success. So, Bayne and Fisher also present three management strategies to mitigate the impacts of extreme weather events on Burrowing Owls. The first, and most important, is habitat management. Burrowing Owls thrive in places that have two things: a place to nest, and something to eat. Bayne and Fisher suggest managing fields to maintain a patchwork of tall, dense vegetation that supports small mammals (source of prey) and short, sparse vegetation that allows owls to capture prey and to nest. The more food there is available, the less likely it is that owlets will starve in periods of bad weather. The second management strategy is to construct artificial burrows for the owls to nest in. As University of Alberta PhD student Janet Ng explains, because badgers, and thus badger dens, are on the decline as well, constructing artificial burrows could be an important part of an owl reintroduction program as well as a management response in the face of climate change: “Artificial burrows are advantageous to natural burrows because they don’t cave in, they’re less susceptible to weather severity, and they’re much more predator-proof,” she notes. Artificial nests have many owl-friendly features: tunnels are big enough for the owls but not most of their predators; with careful planning and site selection they can reduce the chances of flooding; and, with some maintenance, they can last much longer than many natural burrows. 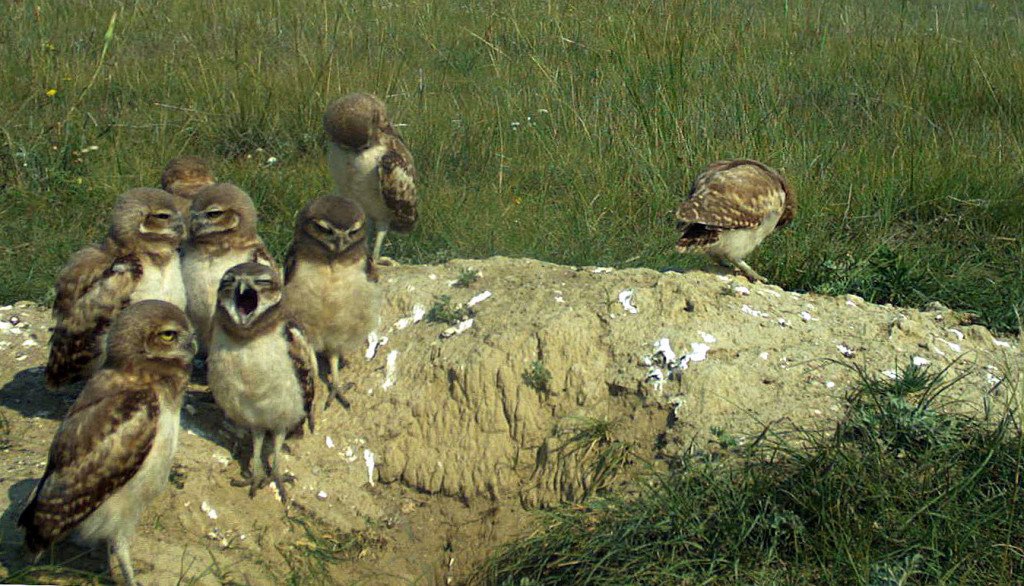 But, Bayne and Ng both caution that constructing artificial burrows is only as effective as the habitat they’re installed in: “You can put burrows anywhere you want and Burrowing Owls may or may not choose to nest there,” says Ng. “Habitat management is absolutely key. Habitat comes first but augmenting nests artificially can go a long way once a pair is established.” Supplemental feeding is a third potential option for helping Burrowing Owl populations respond to climate change. This approach could reduce the effects of food shortage on owlet survival during inclement weather. However, Bayne and Fisher caution that the cost of this option and the geographic scale at which it would need to be done means it should be used only as an emergency measure. So, climate change offers both risks and prospects for Burrowing Owls. Habitat management that supports owl prey while allowing owls to forage, along with artificial burrow construction, are potential ways to buffer Burrowing Owls against future changes in extreme rainfall. Artificial burrows could also be an important part of reintroducing owls into parts of their former range, as climate change potentially increases suitable habitat for Burrowing Owls in Alberta – a clear example of how a changing climate can present unexpected opportunities! What’s next? The outlined climate change adaptation strategies for Burrowing Owls can be incorporated into an Alberta-specific management plan for Burrowing Owls. But Burrowing Owls migrate to Texas, California, and Mexico in the winter, so responsibility for preserving the owls doesn’t lie solely with Alberta but rather interprovincial, federal, and international action will be needed to make sure this species survives in a changing climate. Drs. Bayne and Fisher were among the co-authors of a recently published paper in the journal Condor, looking at how the survival of adult Burrowing Owls in their Canadian breeding grounds is influenced by the weather they encounter during their migration and on their wintering grounds in Texas and California. The Burrowing Owl Climate Change Adaptation Plan for Alberta was developed as part of ABMI’s Biodiversity Management and Climate Change Adaptation project. The project receives its core funding from the Climate Change and Emissions Management Corporation. Photo credit: Troy Wellicome, Environment Canada