It was a day like any other when Varina Crisfield, the ABMI’s Vascular Plant Taxonomist, showed up for work at the ABMI’s Processing Centre at the Royal Alberta Museum*. Little did she know, she was about to achieve something few Alberta botanists can expect to do these days: identify a new species record for the province. 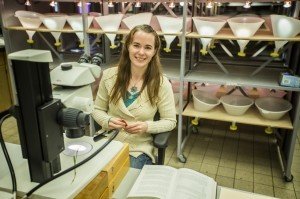 Decades of effort by biologists and naturalists across Alberta has resulted in an extensive list of species records for the province, making new discoveries a rare occurrence. When Crisfield verified her specimen hadn’t yet been recorded in Alberta, she admits she was excited for two days straight! 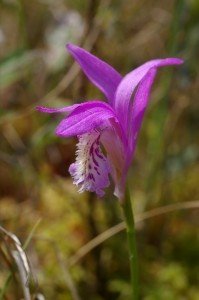 “Both species have similar looking showy pink flowers, but when compared closely, a few differences really pop out,” explains Crisfield of her discovery. With the assistance of Caitlin Willier, an ABMI Aquatics Field Coordinator, and Joyce Gould, Science and Research Coordinator with Alberta Parks, Crisfield confirmed the pressed plant collected by ABMI Field Technician Lauren Law was in fact the Dragon’s Mouth orchid.

Dragon’s Mouth Orchid is a native species with a wide distribution across North America that spans from Manitoba to Newfoundland and south to South Carolina. However, it tends to be rare throughout much of its range. For example, in Saskatchewan, the conservation status of Dragon’s Mouth is listed as S1 (1), meaning it’s only known from five or fewer occurrences, or is especially vulnerable to extirpation (or, local extinction).

In the case of Alberta, although there have been previous reports of its occurrence, these were never confirmed or vouchered (collected, pressed and verified), and therefore Dragon’s Mouth was never added to the provincial species list. 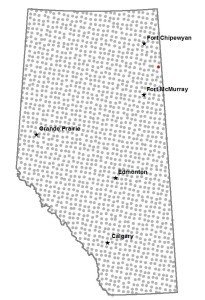 Dragon’s Mouth’s rarity is likely due to a combination of natural and anthropogenic (human-induced) factors. First of all, Dragon’s Mouth is a deceptive orchid. It uses colour and smell to attract insect pollinators to visit the flower in search of nectar, but it doesn’t actually produce the sweet reward. Eventually, insects learn to avoid such deceptive flowers, resulting in decreased pollination rates. Furthermore, the individuals live short lives, and the persistence of populations depends heavily
on reproduction by seed, which tends to be slow and often has low success rates in orchids.

Humans may also have a negative impact on the survival of Dragon’s Mouth populations. Habitat disturbance, such as draining the peatlands in which the orchids live, and over-collection by orchid enthusiasts puts pressure on the already uncommon species.

Back at the Royal Alberta Museum, Crisfield explains the biggest component of her job is to sort through and identify thousands of pressed vascular plant samples collected by ABMI field technicians during each field season. Although the possibility of discovering a new species (to Alberta, to Canada, or to science) exists, Crisfield loves her job for the daily challenges it offers. “There are constantly puzzles, conundrums and contradictions to solve when trying to put a name to a specimen.” 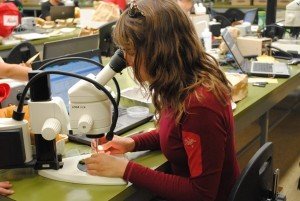 In addition, Crisfield trains technicians in vascular plant identification, contributes to data quality control, and conducts primary scientific research. In this regard, Crisfield and her colleagues at the ABMI’s Processing Centre are working to reduce the “taxonomic impediment” in Alberta, a terms used to describe the global condition of inadequate taxonomic expertise and infrastructure required to fully understand global biodiversity.

As Crisfield says, “Species are the basic units of biodiversity. To understand, manage and conserve biological communities and ecosystems, we first need to know and understand what their components are.” The discovery of the Dragon’s Mouth Orchid in Alberta supports this effort.

Learn more about the taxonomic impediment to understanding and managing biodiversity at the ABMI’s upcoming Public Speakers’ Series: Better Environmental Management Through Monitoring.

Our ‘World Beneath Our Feet’ feature series leans in close, magnifies and investigates the many vast, thrilling and biologically-rich miniature ecosystems that exist underfoot. We are pleased to shine a light on these under-appreciated worlds and the people that dedicate their lives to studying them.
Latest Post:
Join us for a mite-y webinar! →