How many different species of wild bees would you guess we have here in Alberta? How many can you name? Most people drastically underestimate the diversity of bees that call this province home and think of them only as either bumblebees or honeybees. The reality is much richer, with a surprising estimate of over 300 different kinds of bees in Alberta. All of them provide an essential ecosystem service by pollinating crops, gardens, and wildflowers. For example, pollination increases the yield of canola, an important crop grown in Alberta, by 10-30% (Morandin and Wilson, 2005). 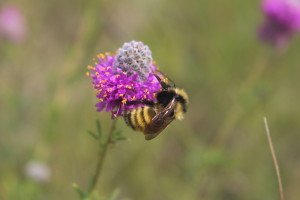 Because of their important role as crop pollinators, bees are of interest to the ABMI’s Ecosystem Services Assessment Project. This project is mapping ecosystem services, which are the benefits provided by natural systems that contribute to our health and well-being. In order to map pollination services, the project requires information on the abundance and diversity of bees in Alberta, and where they’re living—information that is lacking for many areas of the province.

To address this information gap, the project has partnered with Dr. Jessamyn Manson at the University of Alberta to conduct two years of wild bee surveys across Alberta’s agricultural zone. These surveys are occurring in commercial canola fields all the way from the US border to sites near Grande Prairie.

Surveying bees is not for the faint of heart, as it means getting up close and personal with them on a daily basis. The project team uses two different methods for collecting bees: coloured pan traps and netting. 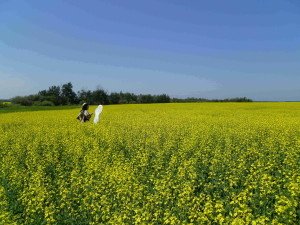 A technician netting for bees in canola. 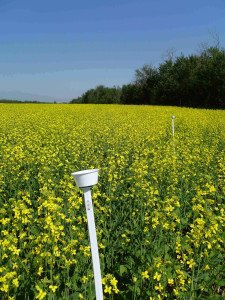 Pan traps set up on stakes in a canola field.

Pan traps are small bowls that attract bees using colours—these tend to trap smaller bees. To catch larger bees, researchers spend an hour at each site collecting bees in a net. After visiting 30 sites twice over the summer of 2014, the bee team is currently in the midst of pinning, sorting, and identifying upwards of 3000 individual bees. Once completed, this dataset will provide an important snapshot of the diversity and ecology of Alberta’s wild bees.

Alberta’s bees come from 5 different families and approximately 30 different genera—only one of which is Bombus, the familiar bumblebee. Wild bees exhibit a range of nesting behaviors and lifestyles. Some, like bumblebees, live in social colonies with a clear hierarchy and division of roles. However, many wild bees are solitary, with individual bees building their own nest and largely keeping to themselves. Surprisingly, some bees, like Halictus mining bees, live in social colonies in low elevations and at the southern end of their range, and are solitary at high elevations and in northern latitudes.

Regardless of their lifestyle, all bees need access to undisturbed habitat for building nests, such as rangelands or shelterbelts, and flowers for pollen and nectar. Bees are incredibly resourceful at finding interesting places to build nests in these undisturbed areas, often settling in rodent holes or even old raspberry canes. 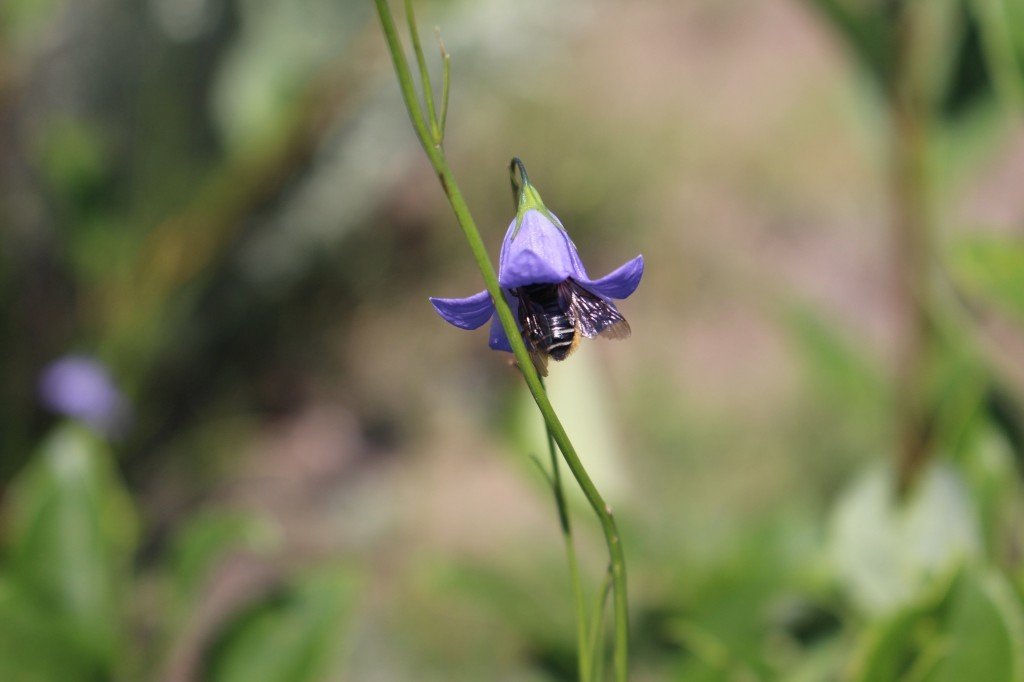 Processing and identifying the specimens from 2014 is still underway, but so far, one of the most common and widespread types of bees in Alberta are the sweat bees from the genus Lasioglossum. These are small bees that earned their name as a result of their tendency to lick sweat off people! As more information is gathered on Alberta’s wild bees, it will be used to understand regional patterns in bee communities and to create maps of pollination services across the province.

Mapping pollination services is done by building relationships between bee abundance, landscape condition, and canola yield. When applied to the entire province, these relationships provide an estimate of the proportion of yield provided by pollination, and subsequently, the dollar value of that additional yield. This type of information will help canola producers understand how bees are impacting their yields, and to explore the trade-offs of maintaining bee habitat in field margins.

The bee team is currently preparing for a second field season in 2015 and continuing to process the 2014 samples. Stay tuned for updates!

For more reading: Native Pollinators and Agriculture in Canada