Dealing with uncertainty: how will Alberta’s boreal birds respond to climate change?

If you’ve ever listened to a forest in the spring, the sound you hear is dozens of birds singing and calling to one another: sending and receiving signals with sound. It may sound like just noise to some, but there is an underlying pattern. It turns out that you could say the same thing when looking at projections of birds’ responses to climate change: we can distinguish patterns in future bird abundance despite “noise” stemming from uncertainty in the projections. 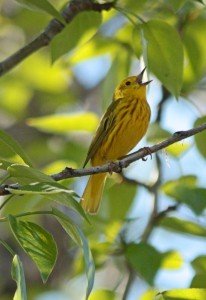 These singing birds are an iconic piece of the Canadian boreal forest. Bird enthusiasts from far and wide flock to key locations along the spring migration route to spy these tiny songbird gems, like the bright and aptly named Yellow Warbler, and the distinctive Ovenbird with its call of “teacher, teacher”. But it’s not just birdwatchers that will be affected by the responses of boreal songbirds to climate change. Migratory songbirds provide the equivalent of thousands of dollars in pest-control services in forests and agricultural systems and provide crucial seed dispersal of plants. Importantly, birds are sensitive to environmental changes, and are often used as indicators of ecosystem health; measuring boreal songbird population responses to climate change projections in the boreal can potentially serve as an early warning of wider ecological consequences of a changing climate.

Scientists often project how species will respond to future climate change by developing a model of the environment or climate where they occur today (their climatic niche), and then using that model to project where that species is likely to occur under predicted future climate scenarios. These are called species distribution models. University of Alberta PhD candidate Diana Stralberg worked with the Boreal Avian Modelling (BAM) project, the ABMI and the Biodiversity Management and Climate Change Adaptation project, to understand how boreal songbirds might respond to climate change.

Stralberg and her colleagues began by using an extensive dataset of bird surveys to estimate where and how many birds are currently found in the boreal. Then, using multiple climate change projections for North America, they mapped projected shifts in each species’ climatic niche, and therefore its likely future geographic range, over the next century. 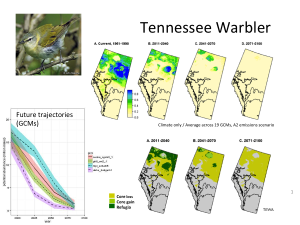 They found that most boreal songbirds are likely to shift northward and upslope (toward higher elevations) in response to climate change. Of the 80 species modeled, 30 were projected to decline in potential abundance across the boreal region of North America by 2040, and 37 by the end of the century. The overall abundance of boreal birds was projected to decline over time as well. For example, the Tennessee Warbler, a small, greenish-yellow songbird that summers in the boreal forests of Canada is presently one of the most abundant breeding bird species in the boreal. However, Stralberg and her colleagues’ climate change projections indicate a nearly complete loss of climatically suitable habitat for the Tennessee Warbler in Alberta by 2080, under all GCM scenarios.

Understanding the potential responses of songbird populations to climate change could help us conserve Alberta’s boreal songbirds in the future. But, how confident can we be that projections of songbird decline are accurate? If there’s too much “noise” or uncertainty in the information used to build the projections, then they aren’t useful for conservation planning. Does the “signal” (projected change in songbird abundance and distribution) outweigh the “noise” (uncertainty and variability)?

In predicting species’ responses to climate change, there are two primary sources of uncertainty: the first is the choice of global climate model (GCM), because they differ in their projections of future climate. Stralberg addressed this by comparing several well-established climate models for North America in her songbird projections. The second source of uncertainty comes from the species distribution models themselves, because there are many different habitat and climate characteristics that can be used to model the current distribution of bird species, or if there are gaps in sampling.

For example, many birds’ distributions are determined by local vegetation and land use, in addition to or even more so, than climate. Because land use won’t necessarily follow climate in the future, Stralberg and her colleagues constructed two sets of models: one that included only climate variables, and one that also included key land use/land cover variables, including agriculture and wetlands. They also built different models using different subsets of the data. 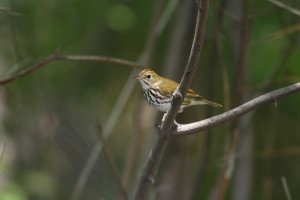 By analyzing the songbird projections from these different sets of models, Stralberg evaluated whether the statistical signal of change in boreal songbird abundance over time could be detected despite the uncertainty. For 58% of 80 boreal songbird species over the next 30 years – increasing to 88% of species by the end of the century – the strength of the climate-change “signal” in projections of abundance was greater than the “noise” generated by these sources of uncertainty. And even though future climate conditions become less certain as we move forward in time, this uncertainty is swamped by the increasing magnitude of projected changes in songbird abundance. All in all, this means we have a pretty good idea of which species will move where, and which are most at risk from climate change (see interactive maps here).

We may never have certainty about what future climates will bring, but thanks to large data repositories such as those maintained by ABMI and BAM, we have enough information to get to work. Of course, scientists will continue to refine models and collect more data to improve our ability to predict the future of Alberta’s landscapes and species. But in the meantime, we can use the information we have to develop forward-looking plans for biodiversity conservation. We can prioritize new areas for conservation for species for which we have good confidence in their future distributions. Integrating information from a range of possible future climate scenarios will help boost our confidence in priority areas even more. Where we have less confidence about the location of future habitat for certain birds, we can focus on areas of overlap between their current range and projected future range. These approaches may offer the best potential to conserve Alberta’s boreal songbirds in the face of a changing climate.