“It absolutely makes my day when I can look at a row of numbers and identify patterns that are ecologically meaningful.”
– MC Roy, Wetland Ecologist, ABMI 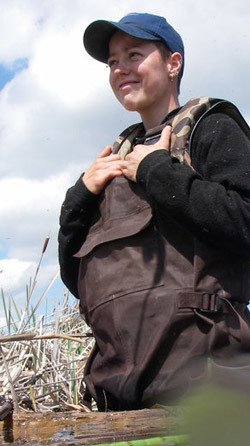 MC spent many transformative summers with her family deep in the woods of Quebec, interacting with nature up close. “There was no electricity or running water, but this was the best possible childhood for me,” says MC. “I learned firsthand how dependent we are on our environment, and how important it is to keep learning about our changing natural resources.”

Armed with her deep appreciation of the environment, MC did her undergraduate degree in Zoology at McGill University; there, a professor pointed her in the direction of wetland ecology. This led her to graduate work at the University of Alberta in wetland ecology and restoration. After spending extensive time studying wetlands in the oil sands region of northeastern Alberta, often in chest waders, waist-high in water, MC obtained a PhD in conservation biology. For her research, she studied the hydrology and vegetation of regional wetlands to establish benchmarks to evaluate the effectiveness of wetland reclamation practices in the region.

At the ABMI, MC brings her experience in wetland ecology to analyze and identify patterns in the ABMI’s large wetland-related dataset. Since 2007, the ABMI has surveyed over 1,000 wetlands across the province, which include marshes, shallow open waters, swamps, bogs and fens. Her intimate understanding of wetlands means she brings a discerning eye when examining the data: she can easily identify issues, such as the presence of outliers, providing another level of data quality control. She’s been working with the ABMI’s Intactness Index –initially developed to describe the status of terrestrial biodiversity–and has recently determined how the concept can be applied to wetland, specifically shallow open water, biodiversity. She also summarizes ABMI wetland data in a form that’s useful to provincial resource managers and industry as they make land-use management decisions related to wetlands. “It absolutely makes my day when I can look at a row of numbers and identify patterns that are ecologically meaningful,” she says.

For example, MC recently determined that in the prairie region, wetlands surrounded with a high agricultural footprint had higher total nitrogen and total phosphorus than wetlands surrounded by less agriculture. This shows that human activities found around wetlands have an impact on the quality of those ecosystems.

MC’s analyses also revealed that Cattails (Typha latifolia), a well-known species, is positively associated with linear footprint such as roads. This make sense ecologically because roads can act as dams and alter the hydrology of wetlands by stabilizing water levels, which is known to favour the establishment and dominance of cattail. In addition, cattails have seeds that disperse mainly by wind; therefore, roads can act as efficient corridors for seed dispersal.

“Drawing links between environmental variables, such as human footprint, and species abundance, as we’ve done for Cattails, shows the kind of patterns we can derive from the ABMI’s dataset,” says MC. “But as an ABMI scientist, I also have the privilege of asking the biologically meaningful questions, such ‘what determines this relationship?’ and ‘does it make sense?’ I have to go back to what I’ve learned at school, at work, from textbooks, from the literature, etc. and verify that the results we see are ecologically meaningful.”

To analyze the ABMI’s wetland data, MC works closely with the ABMI’s Geospatial Centre to source a range of necessary geographic information, such as extent and type of human footprint, as well as climate variables specific to wetlands, such as amount of precipitation as snow. In addition to ABMI data, MC acknowledges the extensive scientific legacy that non-ABMI affiliated aquatic ecologists in Alberta have created over the years. “It’s not every province that has extensively studied its wetlands to the degree that we have in Alberta.” With this cumulative information in hand, MC is well-positioned to evaluate the health of our wetlands province-wide. By assessing the intactness of wetlands for example, the ABMI (via MC and others) can provide a rigorous evaluation of Alberta’s efforts to protect and conserve wetlands.

It’s not surprising that MC’s face beams whenever she talks about her work with wetlands. “Wetlands are sensitive and dynamic ecosystems ­­­that provide countless and invaluable services to our society,” she says. “There is no doubt that there is enormous pressure put on Alberta’s wetlands due to the rapid changes occurring on our landscapes. Many people forget that whatever happens upland, eventually flows down land to our wetlands.” These facts make studying Alberta’s wetlands an ongoing priority for the ABMI, and MC’s work so valuable.