Chironomids – A Case of Mistaken Identity

“In 10 years, the ABMI will likely increase our knowledge of Alberta’s Chironomids 10-fold over the previous 200 years. We want to know how effective Chironomids could be in biomonitoring, and we’re right on the doorstep of that kind of information.”
– Rob Hinchliffe, Aquatic Invertebrate Taxonomist, Alberta Biodiversity Monitoring Institute and the Royal Alberta Museum

At first glance they look like mosquitoes: little buzzing insects, often flying in swarms, with antennae, long legs and mosquito-like beady eyes. Perhaps you’ve seen them around, small clouds of black hovering along the roadside, in storm drains, or perhaps even covering the side of your house. Yikes! Time to call pest control? Not at all, according to Rob Hinchliffe, Aquatic Invertebrate Taxonomist at the Alberta Biodiversity Monitoring Institute (ABMI) and the Royal Alberta Museum (RAM). If you look closely, he says, you can see that they are missing the iconic beak-like mouth parts used by mosquitoes to suck your blood. It’s a classic case of mistaken identity. These insects have often been blacklisted, falsely accused, but they are most decidedly not mosquitoes. On the other hand, in the research world, they receive little attention because they aren’t established ‘pests’ such as black flies and mosquitos. A little more research could go a long way—something the ABMI is working hard at providing. In particular, Hinchliffe and the ABMI are interested in understanding whether Chironomids can be used as effective indicators or biomonitors of the health of the water bodies where they’re found.

Chironomids, also known as non-biting midges, are one of the most critical links in the food chains of many freshwater ecosystems on the planet. Primarily bottom dwellers of lakes and other water bodies, Chironomids convert tiny particulate matter into protein that other animals can eat. “They’re drivers of an ecosystem in a lot of cases,” says Hinchliffe. They are a food source for birds, fish, frogs, and other insects (some small fish feed almost exclusively on Chironomids). These insects can be numerous in any ecosystem (there’s places on the bottoms of ponds or lakes where there can be up to 20,000 Chironomids per square metre!) 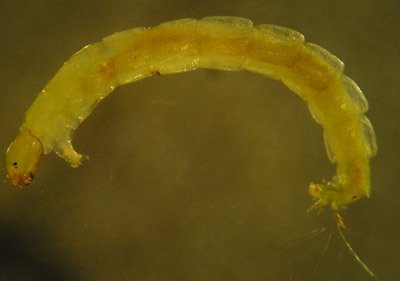 So, what do Chironomids look like? Well, the adults do look a lot like mosquitoes since they share the same insect order (Diptera), along with houseflies and fruitflies. The larvae are a kind of worm-like organism with two short-stubby prolegs[1] at each end. They also have a hardened head capsule, which differentiates them from other worms or worm-like creatures. Depending on the genera or species, sizes can range from a few millimetres up to a couple of centimetres. A few species can actually get up to six cm long. However, in Alberta the largest Chironomid larvae is 2.5 cm long.

Chironomids live virtually everywhere there’s moisture or water. We find them in wetlands, lakes, streams, damp soil and moss, and around waterfalls on slick rock surfaces. Some specialize in surviving in rock depressions or in tree holes where water collects temporarily. There are even species that tunnel through animal dung, and others that live in the water inside the Pitcher Plant, feeding on other insects that get trapped inside. They can be found in a wide range of climatic regions from ponds high in the arctic to tropical rain forests, and from glacial streams well above the tree line to tepid hot springs.

As an extremely diverse group, Chironomid larvae eat practically anything. Most of the groups within the Chironomids are scavengers, feeding on tiny bits of organic material that settle on the bottoms of ponds or streams. Others scrape algae off rocks and other wet surfaces, or prey upon other small Chironomids, insect larvae and tiny worms. A few groups tunnel through deadwood and feed on fungal spores and hyphae, or on dead leaves and decaying wood. Others feed on vascular plants, mining through leaves and stems so they can chew on the softer inner material. Others still are ‘filter feeders’ and can actually filter out small, suspended organic particles or algae from a body of water. Most adults lack functional mouthparts and generally do not feed, but a few do have rudimentary mouthparts that they use to suck up plant nectar for added energy.

For all their activity, Chironomids have relatively short lives and spend very little of it as adults. Species that live in water deposits in rock formations need to complete their life cycle quickly before the water evaporates, meaning they grow from larvae to adult in just seven days. On the other end of the spectrum, there are Chironomids that live in the Arctic that spend six to seven years in the larval stage before they mature.

Despite their fairly low profile, Chironomids are ubiquitous and incredibly diverse. Globally, the number of described Chironomid species is approximately 5,000, but scientists estimate as many as 20,000 different species exist. Only a few hundred of Alberta’s Chironomids have been described by researchers, and Hinchliffe estimates between 500-600 species in the province. In fact, every wetland sample that the ABMI collects contains at least some Chironomids, and their numbers are usually greater than all the other aquatic invertebrates combined. That’s both in terms of population (the total number of organisms collected) and in the number of genera and species present.

“The closer we look at Chironomids in our samples, the more likely we are to describe some new species,” says Hinchliffe. Finding and describing a new species always requires a great deal of work and patience. To begin, there are almost no keys to identify larvae at the species level, so establishing which larva is associated with which adult is incredibly challenging. The ABMI is building this knowledge and Hinchliffe remains positive about the future of Chironomid monitoring: “In 10 years, the ABMI will likely increase our knowledge of Alberta’s Chironomids 10-fold over the previous 200 years. We want to know how effective Chironomids could be in biomonitoring, and we’re right on the doorstep of that kind of information.”

What would the presence or absence of this group tell us about the health of a wetland? “We suspect Chironomids might be the best group overall to target for wetland monitoring,” says Hinchliffe. “They make a good candidate group because they’re abundant and include a lot of species. But, until we have a better understanding of their ecology, we can’t call them an indicator group yet.” He explains that using aquatic invertebrates for wetland biomonitoring is still a young science compared to stream monitoring. This is where the ABMI comes in; currently, Hinchliffe is co-supervising a project conducted by Qi Liu, a Master’s student at the University of Alberta. Qi is collecting data to determine if and how different levels of human disturbance around wetlands affect Chironomid communities, research that could impact how the ABMI uses Chironomids to monitor wetland biodiversity. 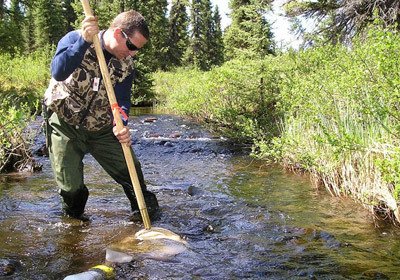 And what should you do if you do happen to find these mosquito-like imposters swarming in your backyard? Hinchliffe suggests that people simply wait. Since they have such a short life cycle they will usually fly away in 12 to 48 hours to mate. So, pull up a chair and enjoy the brief time you have with these often-misunderstood creatures.

For more information on Chironomids in Alberta, check out:

[1] Prolegs are short unsegmented legs found on some insect larvae (e.g. caterpillars have 6 short segmented legs up front, but they may also have 4-6 stubby prolegs at the rear end that they use to help them move and grip).