We all know that biodiversity, like exercise and broccoli, is good for us. For the most part, governments and land managers recognize this too. For example, the Alberta Government maintains a network of parks and protected areas (PPAs) throughout the province as part of its vision of sustainable resource development. Many Albertans use these spaces for camping, fishing, and other recreational fun, reaping the benefits of our province’s rich biodiversity but perhaps not thinking about it in those terms. Without a doubt, PPAs are an important tool in the conservation toolbox. But the question is, just how effective is Alberta’s current PPA network at protecting the province’s biodiversity? Researchers at the ABMI decided to find out by examining PPAs in the northern half of Alberta, and we’re excited to present their work as the latest ABMI Science Letter.

Some species are very well protected, while others are barely covered at all.

To address this, the researchers analyzed GIS layers of vegetation types and species distributions that are freely available from the ABMI. It turns out that the existing PPA network protects some plant communities, and some species, much better than it protects others. For example, while many plant community types are well represented, less than 5% of the estimated original extent of Alberta’s mixedwood forest is protected by the current PPA network. Similarly, over one third of bird and vascular plant species have less than 10% of their respective populations protected by the current network. Overall, the current PPA network protects anywhere from 1% to 62% of the populations of the species examined—in other words, some species are very well protected, while others are barely covered at all. It’s clear that conserving biodiversity means not only protecting land, but protecting land in the right places. 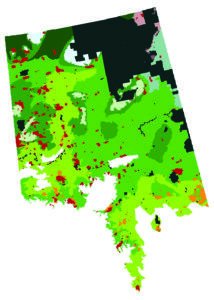 The questions that follow are, how much extra land would we have to add to the existing PPA network in northern Alberta so that all species are reasonably protected? And where would that land have to be? Protecting 17% of the areas of all plant community types, and 17% of the populations of every species, would take too much land to be feasible, so the researchers settled for a lower target: 10%. Using computer models to identify and ‘fill the gaps’ in the existing PPA network, they found that 16,000 km2 of land would need to be added just to ensure that 10% of each major plant community type is protected. To also protect at least 10% of the population of every species examined, a further 5500 km2 of land would be needed, bringing the total to 5.5% of the region—remember, that’s on top of the existing 17.3% that’s already designated as PPAs. The same computer models identified specific candidate areas for accomplishing this (see the picture on the right).

Conserving biodiversity is difficult, and no approach is a silver bullet. But this work shows how emerging tools like GIS and computer models can help in identifying new candidate PPAs to maximize biodiversity conservation while minimizing the impacts on other land uses. In other words, this is yet another addition to the conservation toolbox. That’s something that can definitely benefit us all—even if we can’t get excited about exercise and broccoli!

Read the full report, “Gap analysis of parks and protected areas in the boreal region of Alberta“.

The ABMI also publishes Science in Progress, which is intended to quickly share the methodology and results of work that is still evolving.