Who is the ABMI? Get to know Jerome Cranston, GIS Analyst

A bird’s eye view of an Alberta landscape (photo: ABMI).

While other children were reading comic books, Jerome Cranston was poring over atlases of the world. As a child he also spent many hours in the air getting a bird’s eye view of Canadian landscapes from the cockpit of his father’s plane. “I really need a picture to understand something,” says Cranston, a GIS1 Analyst with the ABMI’s Geospatial Centre. “To be able to fly over the province was such a visual and powerful experience. You can write statistics on a page, but when you show it on a map it has so much more impact and it’s the best way I know how to tell the story of what is happening in Alberta.” Now, Cranston has the perfect career in GIS to do just that.

Cranston’s ultimate goal at the ABMI is to “enable the team at the Geospatial Centre to create a human footprint map better than we’ve ever had before.” It may sound like a tall order, but the Geospatial Centre and its collaborating partners are already making huge strides in delivering critical data such as Historical Orthophotos, Wall-to-wall Landcover Maps and Human Footprint (HF) maps. Many of these datasets are also incorporated into the ABMI’s interactive Mapping Portal, letting users explore their province like never before.

So, what does it take to be a GIS analyst? In Cranston’s case, it means having a very unique skillset. This includes being a visual thinker, being incredibly organized with reams of data, having an aptitude for linguistics—that is, translating and writing computer code and having a good grasp of conceptual logic—and being able to collect and connect a large number of tasks. Beyond this, a good GIS analyst needs to have an artistic eye to extract and interpret data. “There are vast amounts of changing information in GIS,” says Cranston. “But it’s finding the answers to your questions that requires creativity, and communicating that meaning is what we do at the ABMI.”  Most of all, Cranston enjoys experimenting with GIS and better map making. No two days are the same, and he relishes the fact that now he can write code that can perform tasks in a matter of minutes or hours that, in the past, might have taken cartographers months! 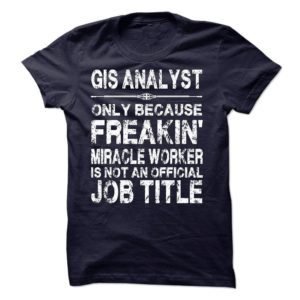 Before coming to the ABMI’s Geospatial Centre, Cranston worked in forestry for several years and then transitioned into the field of GIS at the Foothills Research Institute, where he focused on tracking Grizzly Bears. Now at the ABMI, Cranston develops new ways to map and monitor human footprint and natural landscapes, such as wetlands, in Alberta. He also works to automate mapping processes, both to manage the high volumes of data and to fulfill the ABMI’s mission to efficiently monitor changes in biodiversity in repeatable ways. Cranston says that the ABMI’s Geospatial Centre is working toward demonstrating real-time tracking of landscape changes; in fact, he suggests that could soon be a reality.

Remote sensing technology, also a large part of Cranston’s work, is likewise undergoing major shifts. Traditional passive sensors, like the Landsat2 satellite, that rely on reflected light, are now augmented by more active sensors such as LiDAR3 and RADAR4, which is useful for targeted monitoring. “Satellites like LiDAR open up new dimensions and help us to identify land formations not visible to the human eye,” says Cranston. Currently, he is using remote sensing data to analyze and improve the mapping of seismic lines, and explore areas that are good candidates for habitat restoration. Conventional seismic lines are disturbances left over from the early days of oil and gas exploration. Unlike other types of expanding human footprint, seismic lines provide a rare opportunity for habitat restoration, especially as they often degrade habitat for at-risk species such as Woodland Caribou. 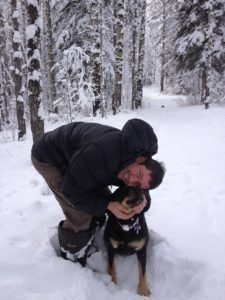 Photo: Cranston with his beloved dog Ruby hiking the trails in Hinton, Alberta.

For Cranston, working at the ABMI is not just about creating new maps; it’s about making these maps act as a wake-up call to the rapid changes occurring in our environment. “We are monitoring at a very interesting time,” he says—and if Cranston has one message, it’s that GIS and efforts to map Alberta’s human footprint matter. “This is serious stuff and we have a narrow opportunity to change things. The work that ABMI does is absolutely critical. We provide good information, and it’s information that you can’t get anywhere else, so that informed decisions can be made.”

In the future, Cranston sees GIS becoming even more accessible. With ABMI data and other tools such as Google Earth and GIS mobile devices hitting the mainstream, he hopes that the public will also be able to experience a bird’s eye view of the country as he did as a child and, in turn, better understand the story of our changing landscape.

This post was researched and written by Sonya Poller, and updated/posted by Kurt Illerbrun.