The Secret Life of Fieldwork at the ABMI

May 8, 2017 / Comments Off on The Secret Life of Fieldwork at the ABMI / Category: Biodiversity, Monitoring, Science
Posted by: Kurt Illerbrun 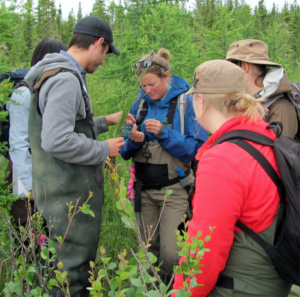 Now that it’s finally spring and our world is turning green, many of us are probably thinking about gardens and backyard BBQs and quality time outdoors. Here at the ABMI, we wish we had more time for BBQs, but we’ve got the outdoors part covered as we gear up for another season collecting data on Alberta’s biodiversity. Every year our teams go to more than 200 of the ABMI’s 1656 border-to-border survey sites, recording species and a laundry list of other information about our province. To make this happen, we hire up to 50 field technologists each summer to brave bugs, bears, and 3-am wake-up calls in the name of science.

What you might not know is that these won’t be the first people to visit our research sites this year. That honour goes to the ABMI’s full-time field technologists, a hardy bunch that works out of our Vegreville offices. These unsung folks kick off the year’s field work by setting up each and every scheduled site in the dead of winter. Their efforts allow the ABMI to collect more and better data, and complement the summer field work to come. 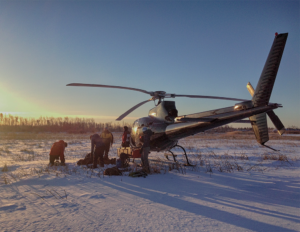 An ABMI winter field crew prepares for the day ahead.

Picture this. Forget the BBQs and all the green, and think back a few months—it’s 32 below, somewhere north of Fort Chip. Snow and ice fly as a chopper lifts off into the dull February sky. The engine fades into the distance, and as the snow slowly settles, two figures don their heavy packs and set out into the boreal forest. After trekking a few kilometres to pre-determined GPS coordinates, they’ll mark the site with flagging tape, record site details, and install automated cameras and audio recording units (ARUs). These devices are at the cutting edge of biodiversity monitoring, and they’ll operate continuously until the summer field crews return in July. Once installed, it’s back out to rendezvous with the helicopter—just a normal day at the office.

Did we mention that these folks are tough? All told, each of the ABMI’s 14 permanent field techs spends about eight weeks in the field every winter, working in shifts of two continuous weeks away from home. Over an average winter, the team will deploy around 800 cameras and ARUs (four each at every scheduled ABMI site), completing the setup for one site a day in remote areas, and two or three closer to civilization. The only time work stops is if the average high temperature drops below –35°C! 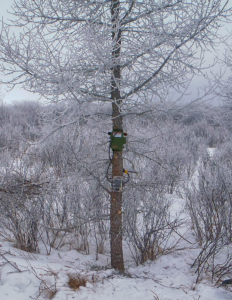 An autonomous recording unit (top) and camera at a frozen ABMI survey site.

You’re probably wondering why this has to happen while Alberta is frozen solid and people are thinking more about bundling up than biodiversity. It’s partially logistical: It’s vital that each ABMI site be prepped before the summer field season, and with more than 200 sites to cover each year, work has to start early to be done in time. But it’s also about ensuring quality data, and leveraging the latest technology to extend the ABMI’s monitoring scope. For example, having eyes on the ground so early gives us time to find a replacement if a site is inaccessible. Just as importantly, getting our cameras and ARUs out early ensures they can operate for around 6 months, allowing us to monitor less common, or seasonally variable, species more effectively.

Once their winter program is complete, the full-time techs turn to education, preparing the ABMI’s new summer recruits for their own field work. That’s what the ABMI is preparing for right now. Eventually, the summer field crews will return to the study sites to perform extensive plant surveys, and to take down the cameras, ARUs, and flagging tape. And, once the summer field work is done, six months of biodiversity data will be checked for quality, analyzed, and made available to all Albertans—and another successful year will be on the books. So when you next peruse the ABMI’s Data & Analytics Portal, spare a thought for all the boots—and snowshoes—on the ground that helped make it happen.