Albertans have a new resource at their fingertips that provides detailed information on hundreds of Alberta’s plant and animal species. Welcome to the ABMI’s new online Data & Analytics Portal—a one-stop-shop that provides easy access to our extensive biodiversity-related data, reports, and maps.

Habitat associations for the Gray Jay, as seen on the Biodiversity Browser module of the new Data & Analytics Portal

A key part of the Data & Analytics Portal is the ABMI Biodiversity Browser (BB), which presents more than 350 (and counting, with a goal of 2000+ species that the ABMI collects data on) full profiles of various bird, mammal, and vascular plant species. The profiles include information on species’ habitat preferences and how human activities, such as agriculture and forestry, affect their abundance. They also include maps predicting where in the province the species are likely to be found. 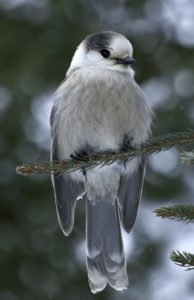 For example, if a user wants Alberta-specific information on the Gray Jay—recently named Canada’s National Bird by Canadian Geographic—the BB shows that the Gray Jay prefers mid-aged to old black spruce and larch stands (it uses these conifer trees for nesting and food storage). This habitat preference likely explains other BB data that shows the negative effect of various industrial activities, including forestry and energy development, on Gray Jay relative abundance in the northern half of the province. A “Difference” map for the Gray Jay—also included in each species profile—shows that this bird species is estimated to have decreased across much of its range in Alberta. 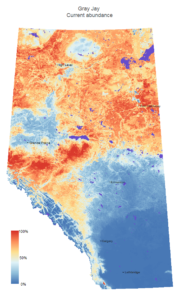 A map of Alberta showing the estimated current relative abundance of the Gray Jay.

On the mapping front, the ABMI Data & Analytics Portal takes our users into new territory. In another Alberta first, the Portal includes a brand-new online mapping tool, where you can interact with and query a variety of biodiversity-related maps. For example, you can view the distribution of different types of human footprint across the province. If you’re interested in the intensity of agriculture in a particular area, you can zoom in or select from various pre-determined administrative units, such as land-use regions, to get summary statistics for that area. And you can even launch another map, for example provincial energy footprint, for a side-by-side comparison.

For more than 10 years, the ABMI has been collecting data and reporting on the health of Alberta’s biodiversity. With the Data & Analytics Portal, we aim to bring the wealth of data and information we’ve gathered to everyone interested in the state of Alberta’s natural heritage. Try it out—we hope you’ll find this new tool useful!