An all-access pass to the unsung world of ABMI Access

There are many unsung contributors in the life of an ABMI data point. From the field technicians who collect it, to the taxonomists who identify it and the analysts, quality-controllers, and information managers who prepare it for release, it takes a village. But outside of the ABMI offices, the most unsung of all might be the ABMI’s Access team.

The ABMI’s core monitoring program relies on a 1656-site grid that spans the province, with sites spaced every 20 km. This systematic approach ensures that we’re sampling a true representation of what’s happening on the landscape, and it means we don’t pick and choose where our sample sites lie. Sometimes they’re on public land, but more often they fall on private property. That’s where the Access team comes in.

“The Access team ensures our crews have the consent of private landholders, industry and grazing lessees, First Nations and Metis Peoples, as well as Provincial and National Parks staff, to enter the lands and complete our surveys,” says Christina Colenutt, the ABMI’s Access Manager and, along with Citizen Science Coordinator Jordan Bell, one half of our full-time Access crew.

Months before our field crews set out to the four corners of the province, the Access team is hard at work contacting landholders. Sometimes this is as simple as a phone call, but other times it’s trickier: “I’m starting to feel a bit like a private investigator,” laughs Colenutt. “More and more people are opting out of their landlines and switching to cell phones, so they’re not listed in the phone book anymore.” Sometimes, the access team combs through Facebook, LinkedIn, newspaper archives, and other sources to find information. But Colenutt is unfazed: “I enjoy the challenge and each time I successfully find a phone number for someone, it’s a mini win in my books!”

This might sound extreme, but the bottom line is the ABMI will never access a site without explicit permission from the landholder. “Ensuring our crews have permission to access our site locations is essential to establish and maintain transparent and trusting relationships with Alberta’s landholders,” says Colenutt. “Without establishing respectful and appreciative relationships with Alberta’s land-users, the ABMI program simply couldn’t exist.”

With that in mind, it’s easy to see why the Access team is so vital. For some Albertans, a cold-call from Colenutt or Bell is the first they hear of the ABMI, and may be the sole factor that decides whether they permit us on their land. For many, the Access team is the face of the ABMI. It’s a big responsibility, but to Colenutt, it’s worth it. “I love being the first point of contact with Albertans on behalf of the ABMI, and sharing the details of our program with them,” she says. “It’s especially exciting to chat with landholders who are interested in biodiversity in the province.” 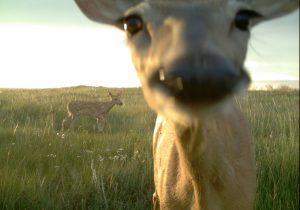 When the ABMI surveys a site on private land, we provide the landholder with a personalized report with photos and details of what we found, and we do our best to solicit and heed any feedback. Recently, we conducted a landholder survey to find out how we’re doing, and the results confirm Colenutt’s first-hand experience of how much Albertans care about their natural heritage. Here are a just a few comments we received:

“Amazed at all the different birds and plants!”

“I feel [Alberta’s] wetlands are very important now and in the future.”

“As a rancher [I] observe nature every day. Your studies give me insight to things in my own ‘backyard’ that even I was unaware of.”

“We thoroughly enjoyed having access to the wildlife camera photos”

“Continue your important work. Facts of change are better than assumptions”

Meanwhile, many landholders were eager to share stories of wildlife they’d seen on their lands, from Grizzly Bears to Yellow Rails. So while tracking them down can sometimes be a challenge, “most folks are glad that we did find them!” says Colenutt. Ultimately, she says, “I love hearing that they enjoy their custom data packages, and [when they] welcome us back when it’s time to re-survey.”

Another perk of the job is that conversations can lead to relationships, and relationships can lead in new directions. For example, says Colenutt, “another thing I love is that our partnerships with First Nations and Metis landholders often lead to other, community-led projects that we can collaborate on. We’re building some really positive relationships with many Indigenous communities across the province.”

Despite the many rewards, the Access team does face occasional setbacks. Sometimes, landholders choose not to grant access. “I really believe in our program,” says Colenutt, “and it can be disappointing when I can’t convince someone of its value.” But we respect these decisions, and when they happen, the team works to secure access to an alternative site. This brings its own challenges, but it’s all part of the job. As Colenutt says, “We survey hundreds of sites in a season, and if even one landholder at a site doesn’t want to participate, it often means starting from scratch. But it’s all the more satisfying when our team succeeds at getting access to our points for the year.”

Once access is secured, the Access team passes the baton to the ABMI’s field crews. From access, to field work, to analysis and communication, the ABMI’s mission is to monitor and report on Alberta’s living heritage for all Albertans. It seems fitting that, at its most basic level, our program exists because of the support, cooperation, and trust of literally thousands of landholders across the province. We’re thankful to our Access team for being such dedicated ambassadors for our program, and we’re especially grateful to Albertans for trusting us to do our work on their lands.