A paper by Ken Rosenberg et al. in Science made headlines last week (picking just a few: here, and here), and not without reason. After recent reports of widespread insect declines, this article reports that North American birds have declined an average of 29% over the past 49 years—a net loss of nearly 3 billion birds. Given the extent and magnitude of land cover changes in North America over the past century and the impact of climate change, the findings hardly come as a surprise.

Underneath the headline-grabbing number of “3 billion birds”, however, are stories worth exploring further. Doing so can get us closer to understanding the causes of these changes and provide guidance for conservation action. For example, in a thoughtful post, Brian McGill highlighted that the 3 billion number is an estimate relying on several assumptions and extrapolation over large areas. And Rosenberg et al. were up-front and transparent about the uncertainty and potential methodological issues that were involved in the latest Partners in Flight (PIF) population estimates. This recently updated database, in combination with state-of-the art trend modelling, provided the basis for the absolute population loss they reported.

Having said that, work conducted closer to home suggests that the overall loss in bird populations may be much more than 3 billion. A team of researchers at the ABMI and the Boreal Avian Modelling Project (BAM) has amassed the best available data set on land birds for the Boreal region of North America—a direct benefit of long-term regional monitoring. Some findings (here and here) indicate that the PIF population size estimates may actually be conservative. 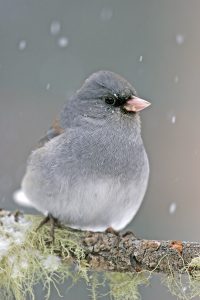 A Dark-eyed Junco (Junco hyemalis) in the snow. Marked declines in common forest species like this are important in driving the overall trend of bird declines. Credit: Donya Nedomam

Another important detail is the nature of the top “losing” species—those that have seen the biggest declines. As McGill points out, by looking at the numbers in the supplementary material, more than half of the 3 billion birds lost is coming from a small handful of species, including two introduced ones (House Sparrow, European Starling). Identifying these top-declining species sheds light on the likely causes of the decreasing population numbers. In this case, agricultural land clearing and intensification has left less and less suitable habitat and resources for common forest species (e.g., Blackpoll Warbler, Dark-eyed Junco) and open-field generalists (e.g., Savannah Sparrow, Horned Lark).

On the subject of which species are showing the biggest changes, the ABMI recently completed a 10-year review of its scientific and monitoring activities. In the resulting report we compared current levels of relative abundance for more than 900 species, including 126 bird species, to estimated pre-industrial levels. Similar to the findings of Rosenberg et al., we found large variation among Alberta’s bird species regarding changes in relative population size due to human activity on the landscape. According to our results, 58% of the birds examined experienced worsened habitat conditions, while habitats improved for only 9%. We also found that the responses of individual species varied greatly by industrial sector; e.g., some species might have benefited from forest harvesting but been negatively impacted by agricultural land clearing, and so on. The consensus emerging from our results and from other studies is that winners are associated with deciduous forests and open habitats while losers are associated with coniferous forests.

While BAM is leading the way for understanding future climate change and land-use impacts on birds across the boreal (e.g., here and here), the ABMI is working towards a better understanding of population status and trend for Alberta birds, with special emphasis on land-use related impacts. Our website provides details on individual species, and we are working with partners and stakeholders to better integrate the findings into land-use planning. The Rosenberg et al. paper underscores the importance of long-term regional monitoring programs such as those in Alberta, and how they can contribute to a broader understanding of bird populations on the continent.