The following is a guest post from Dr. Jenet Dooley, Wetland Ecologist with the ABMI.

February 2nd is World Wetlands Day. Observed internationally since its launch in 1997, it’s a day to “raise global awareness about the vital role of wetlands for people and our planet”. The date commemorates the adoption of the Ramsar Convention on Wetlands, and this year’s World Wetlands Day theme is Wetlands and Biodiversity—something that really resonates with the ABMI’s work.

In Alberta, wetlands are important, highly diverse ecosystems. Wetlands provide benefits to people and wildlife alike. They hold water during wet times and slowly release it back to the environment, reducing both flooding and drought. Wetlands trap sediment and take up nutrients, improving water quality. They also store carbon, protect shorelines from erosion, enhance our food supply by providing habitat for food sources such as fish and rice, and serve as cultural, recreational, and educational resources.

Beyond all that, as you’ll experience any time you visit one, wetlands provide vital habitat to a diverse community of plants and wildlife. At last count, says ABMI Aquatic Invertebrate Taxonomist Rob Hinchliffe, the ABMI has collected 487 unique taxa of aquatic invertebrates at our wetland monitoring sites. We’ve also observed around 600 species of vascular plants. But despite their importance, 60–70% of wetlands in developed areas of Alberta have already been lost, leading to renewed interest in their status and conservation. Visit the ABMI’s Biodiversity Browser to learn more about some of the species that live in Alberta’s wetlands. 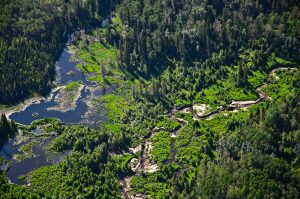 …but in a few short months, our wetlands will be teeming with life. (Credit: Michel Rapinski)

In advance of World Wetlands Day, the ABMI has added new wetland information to some of the vascular plant profiles on the Biodiversity Browser. You can now visualize wetland species detections on the maps as well as wetland indicator statuses for facultative, facultative wetland, and obligate wetland species. The indicator status is a description of where a plant likes to live—for example, in wetland or upland environments. Facultative species live in either wetlands or uplands, facultative wetland species prefer wetlands but can live in uplands, and obligate wetland species are almost exclusively found in wetland environments. For example, check out the profile for Water Sedge (Carex aquatilis), an obligate wetland species commonly found at our monitoring sites. The ABMI monitors at a systematic grid of 1,656 locations where both wetland and terrestrial field protocols are employed. Water Sedge was found in both the terrestrial and wetland surveys at 219 of the 1656 grid locations. It was also found in only the terrestrial surveys of an additional 45 locations, and in only the wetland surveys of an additional 438 locations around the province.

Celebrating Alberta’s wetlands can be tricky in the deep-freeze of February. As the ABMI’s Wetland Ecologist, I’ll be presenting Wetland Biodiversity Monitoring at the ABMI at the World Wetlands Day Symposium at Mount Royal University in Calgary on February 4th. And even if they’re still frozen, it’s a great time to plan a spring or summer visit to one of our province’s many wetlands. See you out there!