The ABMI is happy to continue its regular feature in BIOS, the newsletter of the Alberta Society of Professional Biologists. The following post is adapted from a version that originally appeared in the Autumn 2021 issue.

Here at the ABMI, we spend a lot of time thinking and talking about biodiversity. It is, after all, right there in our name. Mostly the conversation focuses on species as the unit of interest—the effects of human activity on Woodland Caribou or Canada Warbler, say—and that’s understandable given the many amazing species that call Alberta home. But tidy as it may seem, the notion of biodiversity is only the tip of a much bigger ecological iceberg.

Biodiversity is the outcome of countless relationships among species, which in turn are moulded by the environment in which they occur. From this perspective, species are the sums of their so-called functional traits—the ecological functions they fulfill—and there’s increasing evidence that the composition and “functional diversity” of an ecological community can say a lot about how that community might respond to changes in its environment. Research to date suggests that some combinations of functional traits are more resistant than others to things like disturbance or the advance of invasive species. This, in turn, has tantalizing implications for management: If you figure out the secret sauce of functional traits that promotes resiliency, you might be in a better position to prioritize what, and how, to manage.

Which brings us to a paper fresh off the presses from the ABMI’s Science Centre, focused on Alberta’s boreal wetland plant communities. The research used various ABMI datasets to look at the interplay between the diversity and composition of plant functional traits in boreal wetlands, the properties of the local environment, and the distribution of two noxious terrestrial invasive weeds (Canada thistle and perennial sow-thistle). The question, essentially, was what combination of factors, what “recipe,” is associated with wetlands that are seemingly more resistant to invasion. This question is a pressing one, as wetlands in Alberta’s boreal are facing growing challenges from human development and the spread of invasive species, but haven’t been studied as much as other Alberta ecosystems. This marks the first time they’ve been addressed in this way. 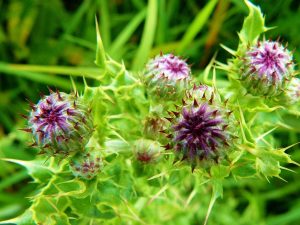 This led to a surprise: “We saw strong but not consistent trait-environment relationships,” says lead author and ABMI Applied Ecologist Brandon Allen. Specifically, the variables had different relative effects depending on how the team structured the relationship between weed invasion and wetland functional diversity—the relationships weren’t symmetrical. When functional diversity was treated as the response variable, local landcover properties and weed invasion emerged as the biggest single drivers of the observed relationship; but when weed invasion was the response variable, water chemistry, hydroperiod, and landcover were instead the main drivers. More work will be needed to get to the bottom of this inconsistency, but as co-author and ABMI Senior Ecological Scientist Ermias Azeria notes, “This really highlights the importance of context in interpreting the patterns of functional diversity across the landscape.”

According to Allen, another surprise was that “We found no differences in functional or taxonomic richness between invaded and uninvaded wetlands,” despite the composition of functional traits being such a strong differentiating factor when it came to weed invasion status. The invasion resistance of wetlands seems to be less about the absolute number of species present, and more about having the right ones.

Though only scratching the surface of the issue, the results give a unique snapshot of plant functional composition and diversity across wetlands in Alberta’s boreal, and the team hopes they’ll help lay the groundwork for predicting whether a given wetland community will resist or shift in response to ongoing and future environmental pressures. For example, based on these results, a manager might identify wetlands with abundant resources—high nutrient loads related to surrounding human activity, say—as being more susceptible to invasion, and prioritize action accordingly. Likewise, they might look to resource-limited wetlands surrounded by lowland conifer forests and other wetlands as potentially being more resistant to invasion.

More generally, the lesson seems to be that nothing happens in a vacuum. The more resource planners and managers can see and consider the scale and environmental context of invasion, the better they may be able to facilitate a wetland’s natural resistance. Likewise, the more aspects of wetland communities—the more substance of the biodiversity iceberg, like functional trait composition—can be accounted for, the more nuanced that understanding can become. Ultimately, invasive species have both ecological and, by extension, economic costs; the hope is that, by identifying wetland communities with traits suited to withstanding future threats, it may one day be possible to improve the success and cost-effectiveness of management actions.

While we’re not yet planning a rebrand to the Alberta Functional Diversity Monitoring Institute, work like this is a reminder of just how much there is to learn. Research elsewhere has already found links between functional diversity and things like ecosystem service provision and response to climate change, so it’s likely we’ll be hearing more on this topic. The tip of the iceberg, indeed.