This article first appeared in the winter 2021 issue of BIOS, the Alberta Society of Professional Biologists’ quarterly newsletter, as part of the ABMI’s regular feature.

White-tailed deer would rather not have a white Christmas. Or new years. Or any time, really. That’s according to a new paper from the ABMI’s Caribou Monitoring Unit (CMU), which looked at the effects of snow conditions and human footprint on white-tailed deer across Alberta. It turns out that white-tails prefer less snow and, at least in some areas of the province, more human footprint—results that hold interesting implications for managing Alberta’s threatened woodland caribou.

White-tailed deer populations are expanding in many areas across North America, sometimes leading to apparent competition with other species, like caribou. Essentially, larger deer populations mean more predators, such as wolves, and more predators mean more predation on all prey species—including ‘innocent bystanders’ like caribou. White-tail population expansion is influenced by many factors, including human land-use patterns and climatic effects, and understanding these factors can help managers mitigate the effects. 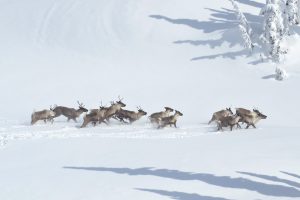 The CMU team, led by MSc researcher Maud Laurent, estimated white-tail presence and density from nearly 200,000 ABMI camera trap images, and used models to relate it to snow-depth (a proxy for winter severity) and province-wide human footprint from the ABMI’s Human Footprint Inventory. The project held more than just scientific interest for Laurent: “Coming from France to Alberta I was thrilled to see the large wild places of Canada,” she says. “ABMI is also a big institute and coming from a small faculty, I liked the idea that I could access a lot of data and that it would require a lot of exploring.”

Then again, says Laurent, “Thousands of cameras created a very big data set, and I have to admit it was sometimes complex to work with”. ABMI-developed neural networks helped to automate photo analysis, but the relative contributions of climate and habitat alteration to deer expansion remained difficult to tease apart. For example, in many northern landscapes, including Alberta, winter severity and human footprint are inversely related in space: as latitude increases, there is typically an increase in winter severity and a decrease in human footprint. To help account for these latitudinal differences, Laurent and her team split the province into ‘north’ and ‘south’ latitude classes, which were included in all models.

The results were in line with the team’s expectations but offered some surprises. Everywhere across Alberta, less snow was associated with higher deer presence, which lines up with seasonal deer movement patterns. On the other hand, more human footprint was associated with more deer in the north but not in the south, and the effect was especially strong for sites with relatively low human footprint to begin with. In other words, in relatively undisturbed habitats, such as those prevalent in the north, even small increases in human footprint may facilitate white-tailed deer expansion. As Laurent says, “Deer are expanding in Alberta and if you consider these results, they will likely keep expanding considering growing human activities in the north of Alberta and climate change. That’s important when evaluating methods to slow down their expansion, especially habitat restoration.” Among other things, the result implies a disproportionate benefit of protecting habitat in northern areas to reduce deer expansion.

Another surprise was that the previous winter’s snow conditions also impacted deer presence and abundance in the following spring. Laurent found this lagged effect interesting “because most studies suggested populations were able to ‘bounce back’ after a cold winter.” Instead, if white-tail populations are constrained by severe winters, then as climate change continues to bring warmer winters, a point might eventually be reached at which winter deer distribution is no longer limited by snow depth. “[This suggests] differences in seasons need to be considered when looking at the effect of climate and climate change on deer,” says Laurent. 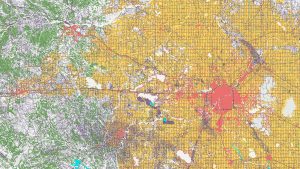 So what does it all mean?  From a management perspective, these results suggest that restoring caribou habitat to nearly unaltered conditions may help to slow white-tail expansion, reduce predator densities, and, by extension, lower predation on caribou. This would be more feasible in northern areas because habitat there is, on average, less disturbed: the effort required for restoration is lower, and such actions might be expected to have a disproportionate benefit. But—and there’s always a “but”—the effectiveness of habitat restoration at restoring predator‐prey dynamics needs to be considered in the context of warmer winters due to climate change. Too warm, and the effect of habitat restoration might be diminished. Ultimately, other caribou recovery measures, such as predator and prey population management, will likely need to be considered along with habitat restoration.

Laurent and her team are quick to point out that this study paints its picture in rather broad strokes: In future studies, it will be important to consider different types of human footprint, more climate variables, and habitat attributes as they relate to seasonal deer movement. Fortunately, “huge amounts of data are now available,” notes Laurent, “and…the more data we have to model our environment, the closer we are to reality. There’s obviously more to learn, but overall we’re happy with [the] connections we found [in this study] because they will guide other studies and management strategies.”