A greener world may hold red flags for Woodland Caribou

In ecosystems across the globe, climate change and habitat alteration are increasing primary productivity in a process that’s been termed “global greening.” While these changes may benefit some species, they can harm others. What are the consequences for species like Canada’s threatened woodland caribou? Serrouya, Dickie, and a team of collaborators from BC, Alberta, Saskatchewan, and the Northwest Territories propose an answer in a newly-published paper—and their results suggest a green world may hold some red flags for caribou.

Primary productivity is the production of organic compounds from carbon dioxide (CO2), most of which occurs through the process we know as photosynthesis and results in the edible tissues of plants and algae. So, roughly speaking, an area’s primary production is its green matter, and plants and algae—an ecosystem’s primary producers—form the bedrock of the food web. Change primary productivity, and you’ll likely see knock-on effects for plant-eating herbivores, herbivore-eating carnivores, and so on through every trophic level of the food web. Crucially to our story, such changes impact different species differently, helping some, harming others, and in any case changing the relationships among them.

As it happens, climate change and direct habitat alteration from human actions both tend to result in more primary productivity—more greenery. You may have heard of eutrophication in lakes, where added nutrients set off an explosion of aquatic greenery, choking out other species. The process is similar in terrestrial ecosystems, where the production of green biomass is generally enhanced by increases in temperature, light, or nutrients like CO2. While these conditions result in more total plant growth, the outcome is often driven by disproportionate increases in some species at the expense of others, with potentially big consequences for the food web as a whole. The question is, what are these consequences, and for which species?

This is where the new research comes in. Serrouya’s team looked at links among habitat alteration (they focussed on forest harvesting, a major cause of human footprint within caribou ranges), vegetation, moose, wolf, and caribou across a large portion of the woodland caribou’s northwestern range. In effect, they posited many possible relationships among these variables—for example, that habitat alteration reduces food for caribou, or that moose out-compete caribou for limited resources, or even that more productivity helps both moose and caribou—and used an approach called path analysis to test which hypothesis best matched observed reality. While other studies have looked at subsets of these factors, this one is unique in its attempt to tackle them together. The result is a study that considers multiple trophic levels, from plants to herbivores to carnivores, across a whopping 600,000 km2 of BC, Alberta, Saskatchewan, and the NWT.

With path analysis, you specify one variable (in this case, the caribou population growth rate) and test the degree to which it depends, directly or indirectly, on relationships with a set of other variables (in this case, the densities of moose and wolf, the estimated primary productivity based on satellite imagery of vegetation, and the extent of habitat alteration after forest harvesting). The resulting analysis shows both the degree and the direction (positive or negative) of the relationships among the variables.

Here the result was clear. Of all the potential relationships tested, the one that was most supported indicated that habitat alteration in the boreal leads to higher primary productivity; that the resulting glut of greenery increases moose densities; that more moose lead to more wolves; and, most importantly of all, that more wolves mean more predation on “innocent bystanders” like caribou. This aligns with other recent research, also from the CMU, which found growing white-tailed deer populations due to habitat alteration and warmer winters, which in turn may mean more wolves and the potential for greater predation on caribou. It also supports previous CMU research linking moose expansion with caribou declines. But the current paper takes things further by showing evidence for an ultimate cause that might set events in motion—global greening caused by the direct and indirect effects of human activity on the landscape. 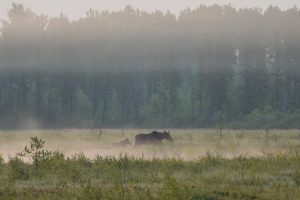 You may wonder why, if moose apparently benefit from more vegetation, caribou don’t as well. The answer, glib as it may sound, is that caribou simply aren’t moose. They’re adapted to a (historically) nutrient-poor boreal environment, and display a correspondingly low rate of reproduction and population growth that can’t be easily exceeded even when food is abundant. Meanwhile, moose have a much higher reproductive potential that’s unleashed when conditions allow, which in turn means more food for wolves. For caribou, greening is a double whammy: it replaces their preferred habitats with different, overly-productive ones, and it ultimately leads to more predation.

Depending on your perspective, increases in primary productivity aren’t all bad. For humans, a greening planet may actually improve yields in agriculture and forestry in some regions. Under some conditions, even caribou may benefit from the physical protection offered when more productive forest stands regenerate faster after disturbance. But these benefits are localized, and the net overall effect on biodiversity seems to be negative. Ecosystems are complex, and significant changes in some of their components usually come with consequences elsewhere—as we’ve seen, for example, with the moose and the wolves. Caribou now find themselves at the confluence of several such consequences.

From a scientific perspective, it’s exciting to trace the thread of a story though so many levels—to see how a change at one point in the system can have cascading effects elsewhere. But as for what these results mean for woodland caribou in Canada, there are no simple answers. On one hand, predation by wolves remains the obvious direct cause of caribou declines, which explains why some managers choose to control wolf populations as a short-term way of reducing or even reversing caribou population losses. On the other hand, this work highlights just how many other factors are in play—especially habitat alteration and climate change. Ignoring this component in recovery plans would be an oversight, both for caribou and for other species dependent on “less green” ecosystems. The more we learn, the more it seems that ultimate solutions to the decline of caribou will need to draw not just on threads, but on an entire fabric of interactions we’re only beginning to understand.